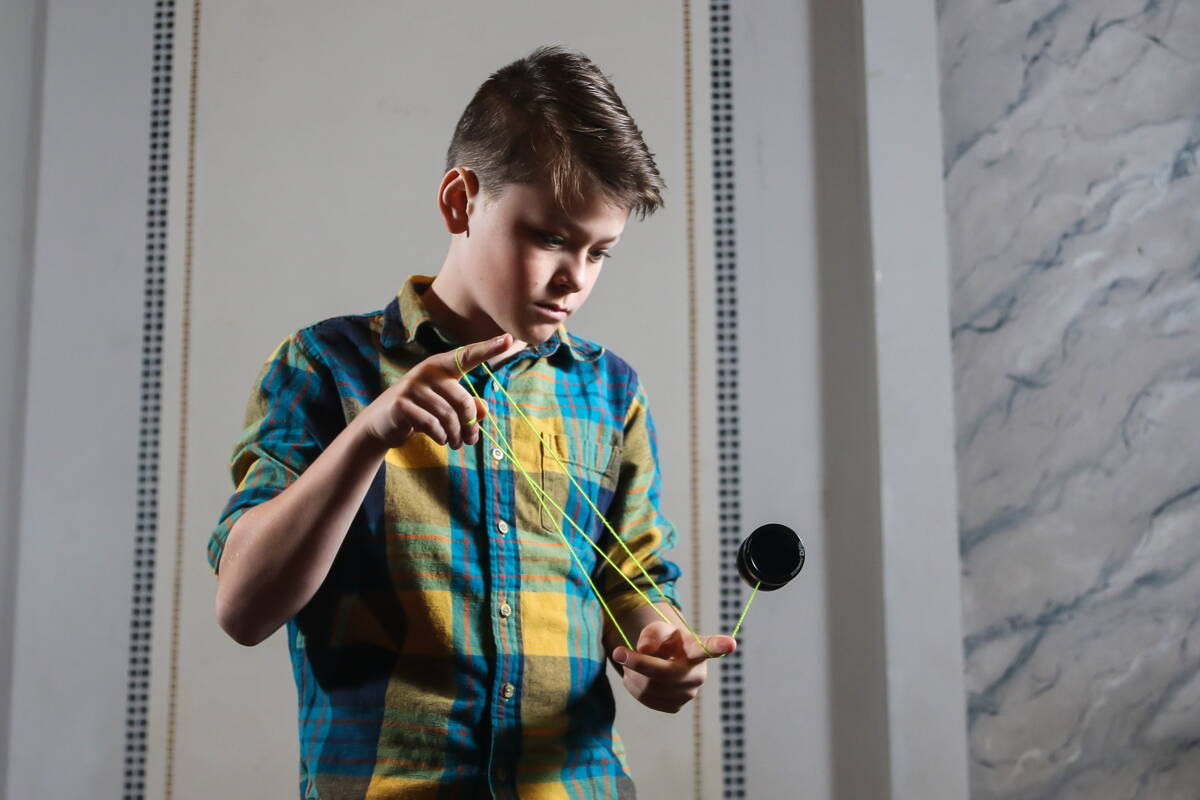 TRICKS OF THE TRADE. Levi White may only be 11 years old, but he’s already mastered the art of the yo-yo through watching YouTube videos, inventing his own tricks, and lots and lots of practice.

To say that Levi White is an energetic, enthusiastic, inspiring, and all-around cool kid would be a gross understatement. Meeting Levi, his mother, and his cousin (who was along for the ride) put a smile on my face for the rest of the day. He performed his yo-yo tricks and stunts for me while we chatted about his hobby-turned-small business.

From the start, this young man intrigued me as he introduced himself by extending his hand to shake mine. He looked me squarely in the eyes and said, “Hi! I’m Levi, nice to meet you.” (Good job, Mom!) Levi is an 11-year-old full of energy and enthusiasm for the yo-yo, performing and competing with the yo-yo, and the desire to enrich others lives through the yo-yo.

Levi is the second in a family of three children homeschooled by his mother, Keri. And let’s give a little shout out to his mother who supports and encourages this young man and has instilled the values that drive him forward. She watched him perform with the same captivated look on her face that I had on mine even though she has probably seen his tricks hundreds of times.

Levi, who lives in rural Fall Creek, is a self-taught yo-yo master and has been teaching himself and perfecting his craft for just three years. He employs a special yo-yo used for advanced and competitive users with ball bearings that keep it spinning longer. Levi has taught himself by watching YouTube videos and by just “making stuff up.” Other yo-yo masters also inspire him. Levi has recently been incorporating his body into tricks, such as stepping through a web he has spun with the yo-yo string. He demonstrated spinning the string into the shape of a star and Darth Vader’s face. But learning does not come without hard lessons: While practicing he has hit light fixtures as well as his own head, leaving himself bruised. Levi competes alongside adults with many more years experience, but he doesn’t let that stop him. At the age of 10, he placed fifth in a competition where he was given one minute to perform to a song chosen by the judges. He was judged on creativity, choreography, and risk or level of difficulty. He is looking forward to competing June 18 at the Mall of America and possibly in Chicago at a later date. If he continues, he could potentially compete in Japan.

Levi has performed at the L.E. Phillips Memorial Public Library in Eau Claire and for a second-grade class in Minnesota. He has performances scheduled at the Chippewa Falls library and during a story-time hour at That’s Adorable downtown. But Levi doesn’t just want to perform for entertainment: His ultimate goal is to “enrich people’s lives and teach kids perseverance by using their talents to help others.” He is consistently trying to improve his skill by thinking how he can do tricks faster, going outside his comfort zone and trying to think of new ways to improve on old tricks by adding steps. When Levi isn’t practicing his yo-yo, he likes to read, play Bananagrams with his mom, and juggle. He also has been teaching himself how to use a kendama, a traditional Japanese toy.

He hopes to take his yo-yo performances into nursing homes and hospitals. He wants to visit nursing homes because, he said, “They love youth and want to see them using their talents with a classic toy. It would make them happy.” And he wants to perform at hospitals because he “wants to show them different talents and bring out good news because joy brings happiness, which makes you feel better.”

Levi would love his future to include being sponsored by a yo-yo company and traveling around the world competing and performing his tricks and bringing happiness and joy to those he meets. “I want to spin people’s attitudes for the better and have them live out their talents for the better,” he said.