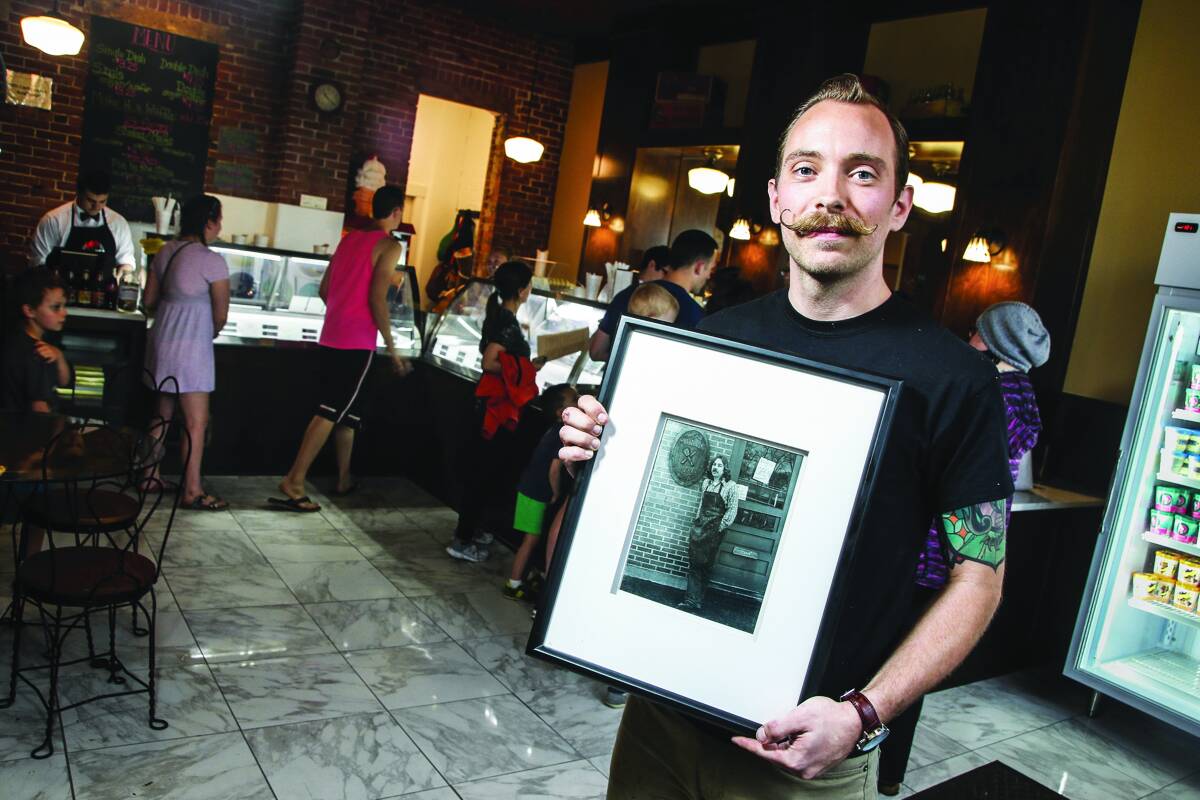 A cold, rainy, Wisconsin afternoon doesn’t sound like the ideal conditions for opening an ice cream shop. But on Saturday, May 20, despite her best efforts, not even Mother Nature could dampen the opening of Ramone’s Ice Cream Parlor, downtown Eau Claire’s all-new dedicated ice cream shop.

Our local love for frosty treats was unstoppable. As Blayne Midthun – who co-owns the shop with his wife Kayla – puts it, “After the first two days of business, we had completely sold out of two flavors, and after the third day, we had run out of another six! We had to rush order an early delivery after going through over thirty tubs ... that’s over 90 gallons of ice cream!”

To open the store, the Midthuns spent plenty of blood, sweat, and tears (and money and time) completely restoring the first floor of the little building standing on the corner of Galloway and North Farwell streets. He says, “We didn’t want to hold back on anything during the remodel and really wanted this place to have an authentic feel.”

“I honestly can’t mention one time that I’ve seen someone not like a flavor they have tried, and we served over 1,000 samples and another 1,000 cones or dishes in our first week.” – Ramone’s co-owner Blayne Midthun

Ramone’s offers award-winning Chocolate Shoppe ice cream (of Madison, Wis.) in hand dipped cones, sundaes, and malts. You’ll find 24 flavors in their dipping cabinets and even more in take home containers. Chocolate Shoppe ice cream is low in air and low in high fructose corn syrup, food coloring, and other additives. Midthun says, “I honestly can’t mention one time that I’ve seen someone not like a flavor they have tried, and we served over 1,000 samples and another 1,000 cones or dishes in our first week.”

“It’s been decades since we’ve had a true ice cream parlor,” Midthun explains. “We’re really hoping that we can bring a new flavor to downtown and piggyback on the many businesses and city developments that have made our downtown the place for families.”

In the coming weeks, Ramone’s will begin the construction of an outdoor patio space, adding another 20-30 seats under an ivy-filled pergola at the rear of the building. The Midthuns named the ice cream parlor after Blayne’s father – acclaimed local wood carver and artist Kevin Midthun. His father’s work can be found in local churches and hospitals, as well as UW-Eau Claire, The Stones Throw, and Pioneer Tavern. He even made the State Seal hanging in Wisconsin’s Capital Building in Madison. “Ramone” was his father’s high school nickname.

The red balloons you see in the Ramone’s logo are an homage to Midthun’s grandfather Maynard, a Lutheran minister of over 50 years who often used the symbolism of a red balloon in sermons, focusing on hope and love.

Midthun says, “My dad’s ministry was through his gift of artistic ability and he chose to use his gift to touch others in brilliant ways. ... My father passed away in 2014 and my grandfather in 2010, but I, along with many others, had the benefit and privilege to see what true kindness, humility and love looked like.”

Kevin Midthun passed away due to Aortic Dissection, so Ramone’s is committed to donating a portion of its proceeds to The John Ritter Foundation, which promotes awareness and research of the disease. A large part of the Midthuns’ vision for Ramone’s stems from Blayne’s childhood trips to Bayfield, Wis. which were filled with stops at a local candy shop. The ice cream dream grew stronger after Blayne and Kayla made multiple visits to Leo’s Malt and Grill in Stillwater, Minn. where deluxe malts were their dessert of choice.

Midthun is quick to credit the support of his family and the surrounding community (such as help from Downtown Eau Claire, Inc.) in making Ramone’s a reality. Comparisons to Olson’s Ice Cream of Chippewa Falls – basically the granddaddy of local ice cream parlors – are easy to make. But Midthun wants to be clear on how the other shop has helped them out. He says, “Dan Hunt, the owner of Olson’s was very helpful in answering questions and getting our business started. We continue to tell our friend’s and family to support their business. To me, our area is complete now by having one parlor in Chippewa Falls and another in Eau Claire.”

When simply asked “Why ice cream?” Midthun says he and his wife “both love to interact with people and want to make people smile. What better way than handing them an ice cream cone?”