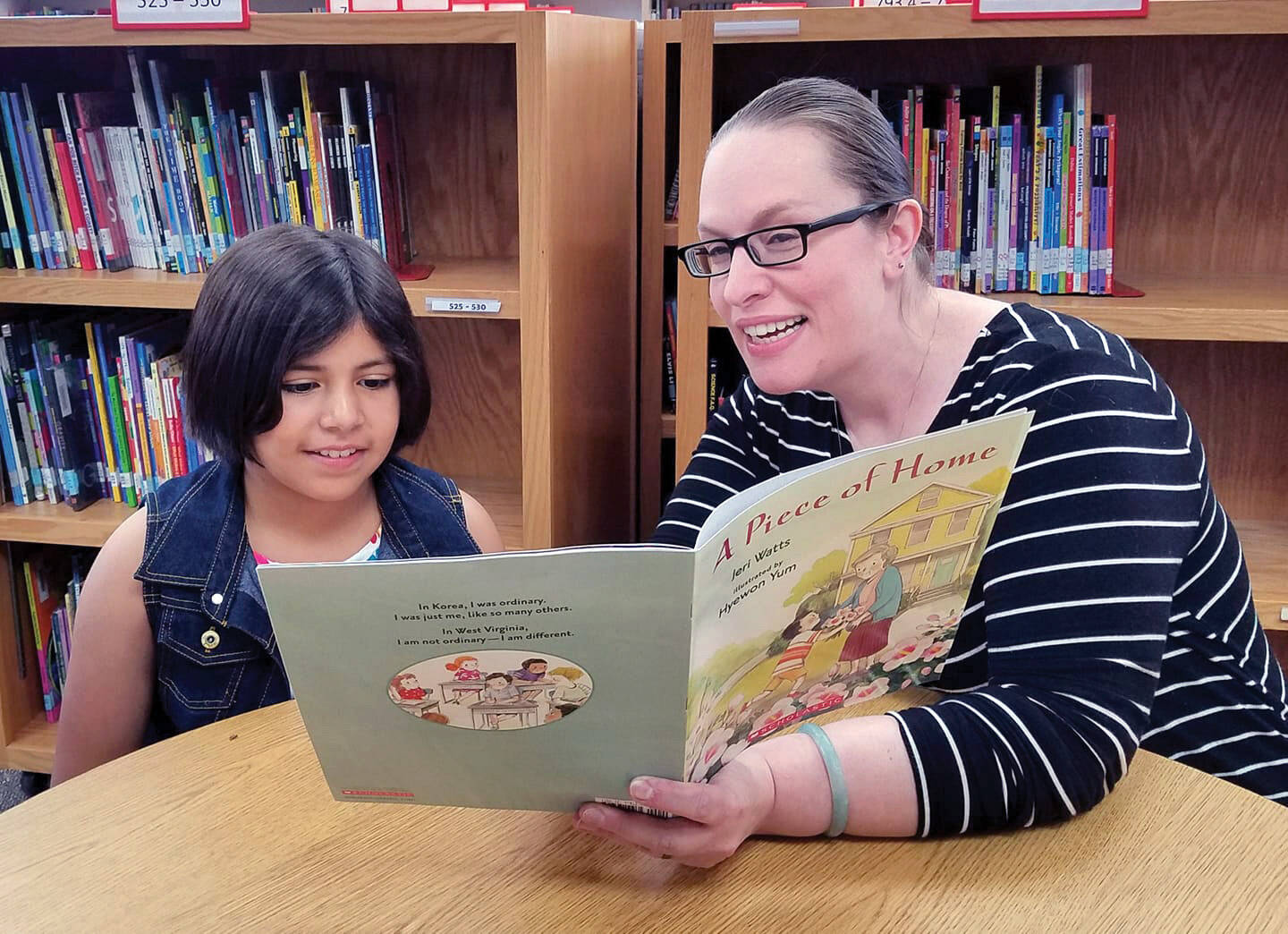 GET TALKING. Becky Linderholm, co-leader of the Family Conversation Kit projects, reads “A Piece of Home,” one of the books included in kits available for checkout at local libraries and institutions.

Most parents hope their children will be better than they are: that they’ll achieve further education, get more rewarding jobs, and be more compassionate toward others. A team that sprung out of the community-building project Circles of Change will assist Chippewa Valley parents in fulfilling that hope.

Family Conversation Kits contain books for children with an accompanying guidebook for adults or teens with the goal of becoming more comfortable with diversity.“Experts say that if we want our children to be unbiased and accepting of all people, we must talk to them not only about ways in which we’re all the same, but also about our differences and the differences in how we experience the world,” explains Becky Linderholm, co-leader of the project.

Research shows the more positive, counter-stereotypical images of others that kids see – even in books – the more likely they are to embrace diversity as they get older.

So why does it matter, besides making us better neighbors? We live in a multicultural, ever-changing world. Raising children who welcome all types of people means they can work and coexist while seeing the world from other perspectives. Recent scientific studies conclude that intercultural relationships spark creativity, thus making this generation better students, workers, and people.

Talking with youngsters about race can be a difficult and sometimes historically horrific topic. Linderholm says, “For me, the most important reason for doing this is so that we don’t raise another generation of colorblind children . … It’s key groundwork to raise children who are empathetic and able to recognize oppression and inequity.”

Though the target audience may be kids, adults – including area educators – will also benefit. Anyone can learn something from these kits. Another key leader in the group, Yia Lor, says, “I’m Hmong, but that doesn’t necessarily mean I know everything about Hmong culture and history.”

Ideally literature should reflect the lives of all people, but children’s books still lack diversity. A 2015 study from UW-Madison’s Cooperative Children’s Book Center showed that about 73 percent of books published that year depicted white characters. Not only do books build empathy by allowing us glimpses into others’ lives, they can serve as “mirrors” for children in marginalized groups.

Lor says, “Only stories that mattered were worthy of being told, and the books I was exposed to as a child led me to believe that my story wasn’t. … In fifth grade, my teacher, Mrs. Hartman, shared with our class a book about a Hmong girl and that was a pivotal moment because it changed the way I viewed myself and the world. For the first time, I realized that I, too, could exist in books.”

Lor, along with a team of educators from the Chippewa Valley, read hundreds of books to make selections for the project. They looked for texts in which the main character and the author are part of a represented group.

These books alone are a significant asset, but the team also compiled guides for families, including conversation starters for the books, lists of words to avoid and words to use (and why), answers to frequently asked questions about diversity and equity, as well as a list of other age-appropriate books on the topic and recommended books and websites for adults. The group developed kits for various ethnic groups and for different age groups (early childhood, young readers or tweens, and teens). Currently, Latinx and Asian kits are available and LGBTQIA+ kits are in the works. Next up will be kits that highlight black/African-American people and Muslim people.

“Many people in the Chippewa Valley and surrounding areas grow up with no exposure to diverse populations in their towns, neighborhoods, or schools,” Robinson says. “These books provide that exposure.”

The kits are funded by donations as a program of the Luginbill Children’s Foundation. Kits are available to check out at public libraries in Eau Claire, Altoona, and Chippewa Falls; the Boys and Girls Club’s Mary Markquart Center; the Family Resource Center in Eau Claire; and UW-Eau Claire’s Children’s Nature Academy.

As an elementary school teacher and parent who is passionate about equity, diversity, and inclusion, Linderholm calls her work on these kits “a perfect storm of everything I care about.” She says, “Many white parents like me want to shield our children from some of the ugliness of the world. We have a tendency to avoid any kind of conversation about prejudice, discrimination, bias, or racism. … Families of color don’t get to shield their children, because they experience these things all the time.”

Linderholm’s goal is to raise her kids to recognize when peers may be treated unfairly and to do something about it. Family Conversation Kits help make it possible for other parents to accomplish the same.