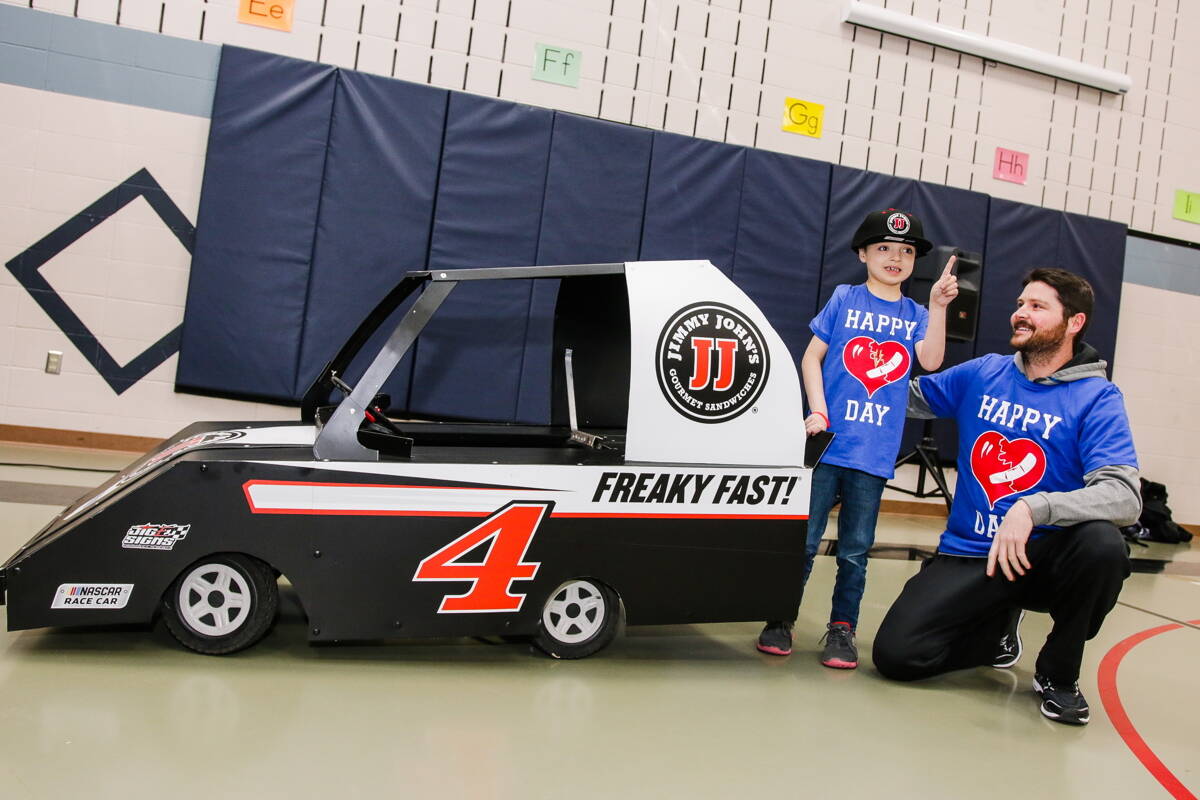 The Eau Claire second-grader demonstrated that during a recent school assembly when he climbed into a custom-made pedal car and cruised around the gymnasium at Chippewa Valley Montessori Charter School, much to the delight of his classmates.

The car’s custom-made exterior was fabricated by Dylan’s physical education teacher (and fellow racing enthusiast) Bart Steffen. Emblazoned with the red, black, and white logos of Jimmy John’s – as well as the sandwich shop’s “Freaky Fast!” motto – the car is a pedal-powered replica of NASCAR superstar Kevin Harvick’s No. 4 Ford.

“To see the smile on his face when he came in was pretty special,” Mr. Bart, as he is known at the school, said of his 8-year-old student’s reaction to the gift.

Mr. Bart and Dylan have bonded over the past few years through their shared love of auto racing. The two have worked closely together on adaptive phy ed lessons designed to strengthen Dylan’s heart. The 8-year-old was born with a serious anomaly that prevents his left ventricle from properly pumping oxygen-rich blood to his body. As a result, he has undergone six heart surgeries and for a time was considered terminally ill. However, last fall doctors determined that his heart was functioning nearly normally, and Dylan was removed from hospice status. Through it all, Dylan built up his strength by whizzing around the school in a pedal car that Mr. Bart had outfitted with a cardboard body. Eventually, Dylan began to ask for a “real” race car, and Mr. Bart – who himself drives Friday nights on the dirt track at Menomonie’s Red Cedar Raceway – decided to oblige. A fancy new pedal car, Mr. Bart thought, could help take Dylan’s mind off his next doctor’s appointment or even his next surgery. He spent months fabricating an aluminum exterior for the pedal car, and even contacted Harvick’s racing sponsor, Jimmy John’s, for permission to use their logos. Jimmy John’s obliged by giving him a scaled-down version of the design used on Harvick’s vehicle, which Josh Erickson of JigE Signs in Menomonie turned into a colorful wrap for the mini race car.

Dylan finally got to see (and pedal!) his eye-catching gift during a school assembly on Feb. 14 – which Dylan’s mom, Talitha Korn, pointed out is both Valentine’s Day and Congenital Heart Defect Awareness Day. Korn said her son had been looking forward to receiving the custom car for a year.

The unveiling was accompanied by a video message from Harvick himself, who Dylan got to meet a couple of years ago at a race in Chicago. “Your car looks freaky fast,” Harvick told Dylan in the video. “Have fun with it!”