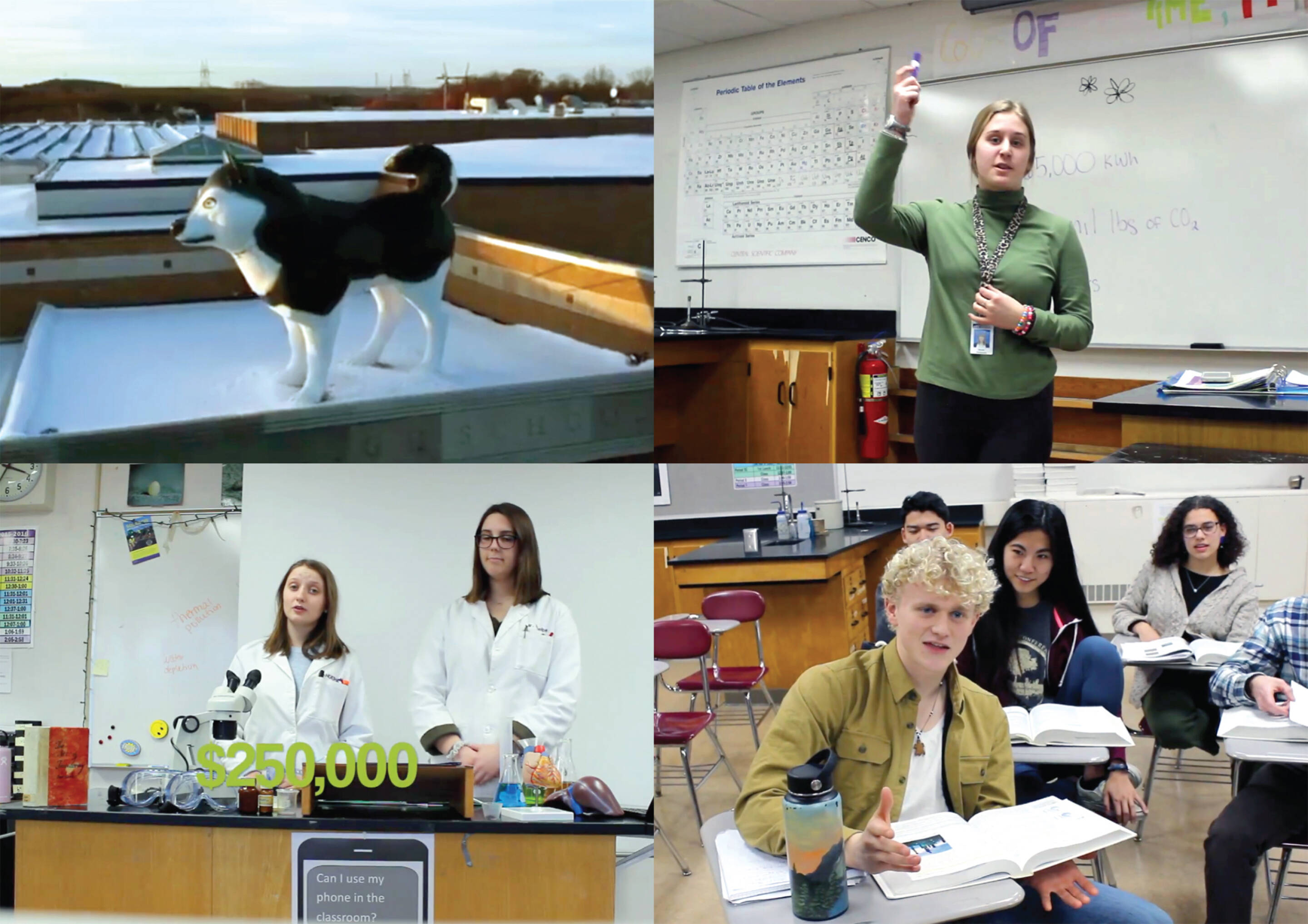 SOLAR STARS. A video created by members of North and Memorial high schools’ environmental clubs explains a proposal to put solar panels on the schools.

While students from Eau Claire’s North and Memorial high schools may be rivals on the football field and basketball court, they’re allies when it comes to a conservation project that will help both schools and the environment.

Members of both schools’ environmental club recently spent hours outside of class creating a video to promote a fundraising project to install and maintain solar panels on the schools’ roofs. Not only will the panels help the schools meet their energy needs sustainably, the students say, but they’ll also save the school district an estimated $20,000 annually and provide educational opportunities.

The students and their advisers hope the video helps kick-start the solar energy fundraising effort, which aims to raise the necessary $250,000 by May 1.

“Every hour, the amount of power the sun emits onto the Earth is more than the entire world consumes in a whole year,” a narrator explains at the beginning of the 3 minute video, which was viewed more than 6,000 times within days of being uploaded to Facebook in late February. “For far too long, this energy has been untapped and wasted because we didn’t have the technology to harness it. But now, we do.”

The Solar on Eau Claire Schools Project, which is overseen by the nonprofit Eau Claire Public Schools Foundation, was launched late last year thanks to the generosity of Cal Couillard, a Memorial alumnus. Couillard – whose foundation has an ambitious goal of getting solar panels on the roofs of 100 Wisconsin schools in the next four years – has agreed to donate half of the required solar panels. Another anonymous donor will match this gift if at least $250,000 in private donations are raised to install and maintain the 720 panels – 360 on each high school. Because it will be entirely privately funded, the project won’t cost school district taxpayers a dime.

And that’s where the video comes in: The students and their advisers hope it helps kick-start the fundraising effort, which aims to raise the necessary funds by May 1. “This is a great project to put solar panels on our schools, but will require a lot of community support,” students say in the video. “Please consider donating to our project. By doing so, you will be investing in STEM and renewable career awareness (and) educational opportunities for local students. And most importantly, a donation will invest in our one and only planet and preserve it for our generation and those to come.”

The cross-club collaboration seemed natural, considering the solar project will benefit both high schools, said Erin Layde, who teaches environmental science at Memorial. Layde encouraged the roughly 15 students involved to gather questions from their parents about the project. Answers to these questions – How will the panels be maintained? Will they survive harsh Wisconsin winters? How will they benefit students? – combined with background information about the project and an appeal for donations, were packed into the video.

“That’s like the best senior prank ever – actually making a change.” – Lydia Monk, North High School senior, on the potential impact of a video promoting a solar energy project on North and Memorial high schools

The process helped the students gain insight into what questions and concerns people of other generations may have about the solar project. “I think it’s interesting to think about it from a different perspective,” said Memorial senior Ashlyn Yates.

True to the collaborative nature of the project, the video was filmed in a science classroom at Memorial, a hallway at North, and in the sky above both schools thanks to drone shots recorded by student Sam Hower. The students worked for three or four days after school as well as numerous hours discussing edits and other details via online chats. “It’s a lot more time-consuming than you think,” Kiersten Wille, a Memorial senior, said of the filmmaking process.

Students crunched numbers to calculate the panels’ carbon-reducing impact, created storyboards for scenes, and wrote a script. The video is packed with amazing facts about the project: For example, the students calculated that a donation of $100 would have the carbon-reducing equivalent of planting 100 trees, that the 720 panels will collectively produce energy equivalent to taking 32 average Wisconsin homes off the power grid, and that the panels will keep 9.2 million pounds of carbon dioxide out of the atmosphere over the next 25 years.

Now that the video has been launched, phase two of the project is beginning: engaging the schools and the community in the fundraising effort. Late on a recent afternoon, students and faculty gathered in a science classroom at North to brainstorm ways to promote the video through social media while engaging classmates, parents, and community members in real life.

Like many environmental undertakings, this one won’t directly benefit many of the people involved: Most of the students who made the video will graduate later this spring, before the solar panels are even installed over the summer. However, they’re optimistic the video will inspire the donations necessary to make the project a reality, benefitting future generations of Old Abes and Huskies long after the Class of 2020 has moved on.

Solar Project by the Numbers

Number of solar panels slated for installation as part of the project, 360 each for Memorial and North high schools.

Fundraising goal, which will cover the estimated cost of mounting and maintaining the solar panels.

Number of kilowatt-hours of electricity the solar panels are expected to produce annually.

The solar panels will produce energy equivalent to taking 32 average households off the power grid annually.

Estimated annual energy savings to the school district from having the solar panels.

Pounds of carbon emissions that the solar panels will keep out of the atmosphere over 25 years.