Curling: The Other Ice Sport 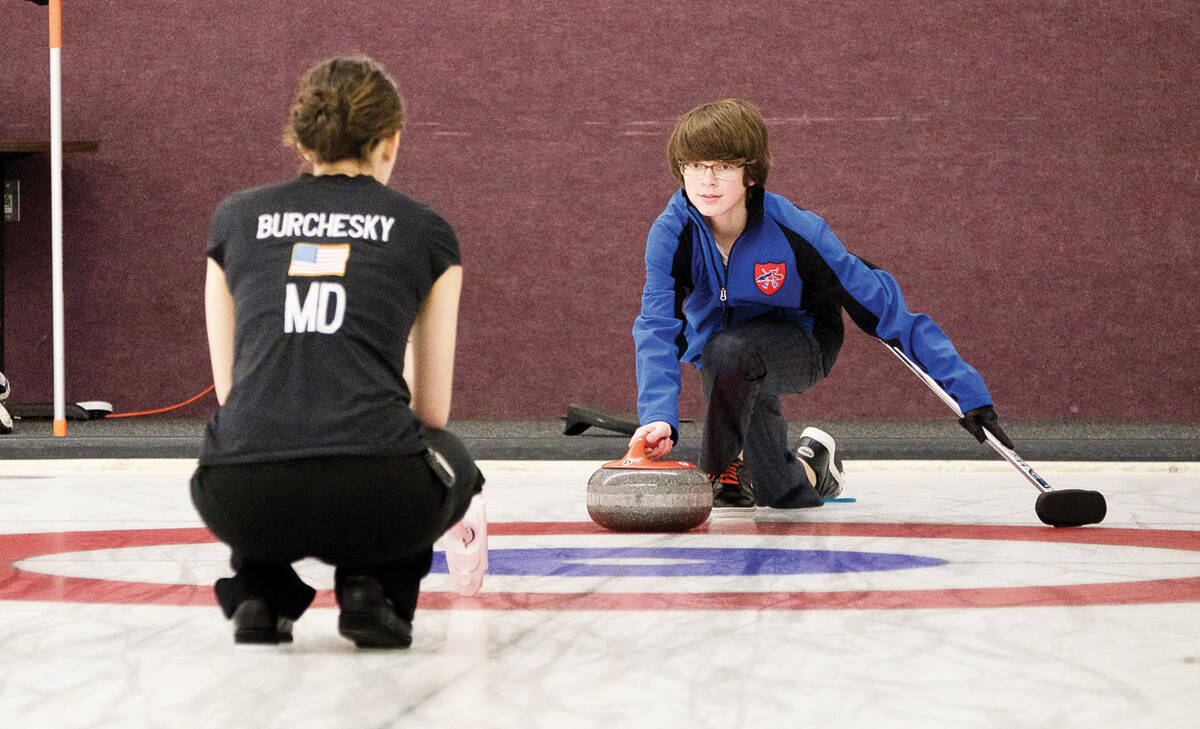 Charlie Thompson, 13, works with coach Jenna Burchesky at the Eau Claire Curling Club. Thompson has been part of the junior curling program for five years and Burchesky, a freshman at UWEC, is new to the program after moving to Eau Claire from Boston.

While entertainment options for kids grow more and more complicated, parents need to remember the cardboard box principal: No matter how fancy the toy, the box it came in is likely to receive the most attention. This same idea can apply to the sports world, too. While the intricate rules and strategies of most athletic options can lead to important learning and competition, sometimes it’s more fun just to keep it simple, like pushing big rocks across some ice.

Although that takes some strategy, too.

The Chippewa Valley boasts some incredible sports options for kids – soccer and hockey and volleyball and all the other classics – but one old Scottish sport is growing in popularity and attracting all sorts of participants, many of whom may not find a connection to other types of athletics. For those who’ve never tried the cold-weather sport of curling, the idea is pretty simple. One team member pushes a large “stone” down a sheet of ice. Two other teammates “sweep” in front of it to alter its speed and trajectory, all while the “skip” waits behind the target and offers directions to the sweepers. It’s like a big game of shuffleboard on ice, and it’s curiously addicting.

“It’s like anything else. If you have the knack, the touch, and the feel, and you put in the work, you can play at a very high level. Or you can just have fun.” – Jeff Thompson, director of youth curling for the Eau Claire Curling Club

Jeff Thompson, director of youth curling for the Eau Claire Curling Club, explained, “The neat thing about curling is there’s no body type or specific skill set. You have to have some level of balance, but you don’t have to be tall, or big, or fast.” That means curling is truly open to anyone, even those without athletic prowess who have shied away from sports. At the same time, curling can be fiercely competitive. “It’s like anything else,” continued Thompson. “If you have the knack, the touch, and the feel, and you put in the work, you can play at a very high level. Or you can just have fun.”

Curling certainly has its diehard fans: Visit the Eau Claire County Expo Center, 5530 Fairview Drive, any night of the week and you can watch hours of league play. The curling community in the Chippewa Valley boasts dozens of multi-generation curling families and at least one former Olympian. For the kids, though, the focus is on learning, skills, and fun. “The number one thing we’re looking at doing is getting them a base of skill and technique, because their attention spans are less,” Thompson said. While that may be true, talking to the youth curlers on a Saturday morning paints a slightly different picture of the kids’ dedication and attention spans. Eighth grader Kaiah Hurt has curled for six years, mainly because her grandfather introduced her to the sport. “I find this pretty easy compared to other sports,” Hurt said. “I can really get flexibility out of this.” Fellow eighth-grader Anna Johnson, who shared the ice sheet with Kaiah on that particular Saturday morning, echoed the same idea. “I like playing games and getting to know how they work,” Johnson said. Charlie Thompson, Jeff’s son and an award-winning curler himself, likes the strategy and skill involved in curling. “It’s a very precise game,” he said. “You have to get everything right.”

Whether kids are looking for a winter sport to compliment their summer options, or are searching for an activity with a less-demanding entry point than soccer or hockey, curling slides in as a great possibility that has attracted more than a few lifelong fans. Jenna Burchesky, a UW-Eau Claire student who coaches youth curling on Saturdays and is a nationally competitive curler herself, added one more reason to consider curling. “It’s a family sport,” she said. “Unlike hockey and baseball and other things, you can play this sport as a family.” So it’s not just kids who have an excuse to climb off the couch in the winter. The cardboard box principal applies to adults, too. Everyone can get behind a big rock on some ice.

Youth curling at the Eau Claire Curling Club started in November, but the club will host an open house for kids interested in the sport in February. For more information, call (715) 834-4898.