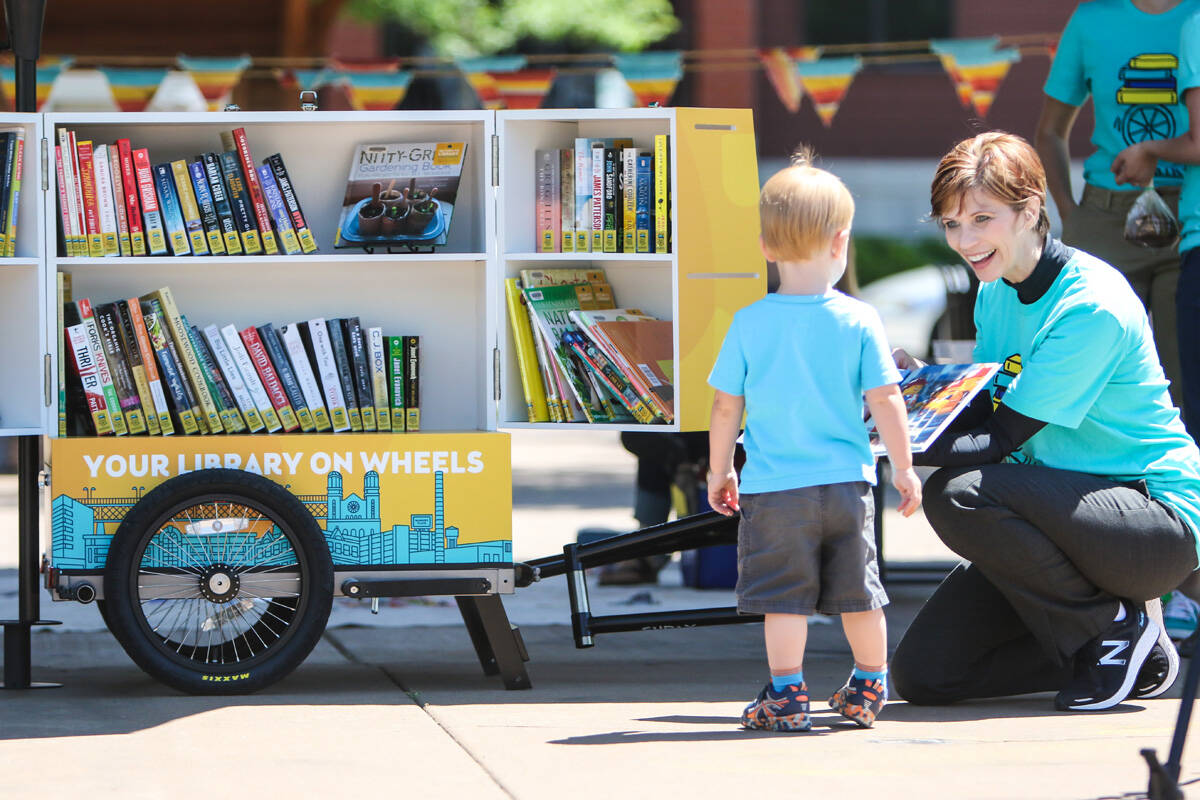 PAGING YOUNG READERS. L.E. Phillips Memorial Public Library Director Pamela Westby shows off the contents of the library’s new BookBike during a jaunt to Phoenix Park on a recent summer morning. The custom-made bike trailer, which can hold about 100 books, will be pedaled to events by librarians.

Eau Claire’s public librarians are ready to break a sweat to bring books to unexpected places. Their tool is a brand-new BookBike, a pedal-powered branch library that you’ll begin seeing this summer at events such as the Eau Claire Downtown Farmers Market and the Sounds Like Summer Concert Series, both in Phoenix Park.

Think of the L.E. Phillips Memorial Public Library’s BookBike as an eco-friendly version of an old-fashioned bookmobile. In addition to checking out books with the help of a laptop-toting librarian, the BookBike will allow patrons to learn how to download digital materials (the library can give you access to e-books and music, among other things), get library cards, and more. Similar bike-toting trailers are increasingly popular across the country, popping up in cities such as Denver, Seattle, and Madison, where the program goes by the punny name “Spoke-n-words.”

Inside the BookBike you’ll find about 100 volumes, including popular adult fiction by the likes of James Patterson, Stephen King, and George R.R. Martin; lots of cookbooks; and plenty of children’s lit, including pictures books and books for beginning readers. The brightly colored trailer folds out in the front and back to display books, which patrons can browse under the shade of an umbrella. When it’s time to return to the library, everything folds up and the trailer attaches easily to the back of a bicycle. “We’re hoping that people think about the library in a different way,” explained Library Director Pamela Westby at a June 22 unveiling event for the BookBike. “There’s an old way of thinking about libraries as dusty warehouses of books.” The BookBike can help dispel this stereotype by popping up and bringing books directly to the public, she said.

“Larger cities are doing more to have a presences where the traffic is,” Westby continued. In some cities, this means putting branch libraries in strip malls; in Eau Claire, it means toting books to busy Phoenix Park (and, in the near future, maybe a block party or other event in your neighborhood).

The BookBike was made by Street Smart Trailers of Boston, which specializes in producing custom bike trailers. Draft Design House of Eau Claire designed a colorful exterior for the trailer, which is covered in a whimsical map of downtown Eau Claire with icons such as pencils, carrots, and kubb blocks representing various landmarks. Even when loaded with 100 or more books, the BookBike is relatively easy to pull, says Shelly Collins-Fuerbringer, the library’s youth services manager, who compared it to a child-toting Burley bike trailer. Collins-Fuerbringer is one of eight library staff members who – clad in aqua-colored T-shirts – will be pedaling the BookBike around town in the coming months.

The entire BookBike effort – including the trailer, two bicycles to pull it, accessories, and design work – was paid for with $10,000 from the library’s endowment, which is funded with donations. The trailer is stocked with high-demand books purchased through the library’s regular collections budget.

If you want to catch up with the BookBike, you can either hit the bike trail yourself or check out the schedule online at ecpubliclibrary.info/bookbike.