Positive STEPS to Get More Girls in Tech 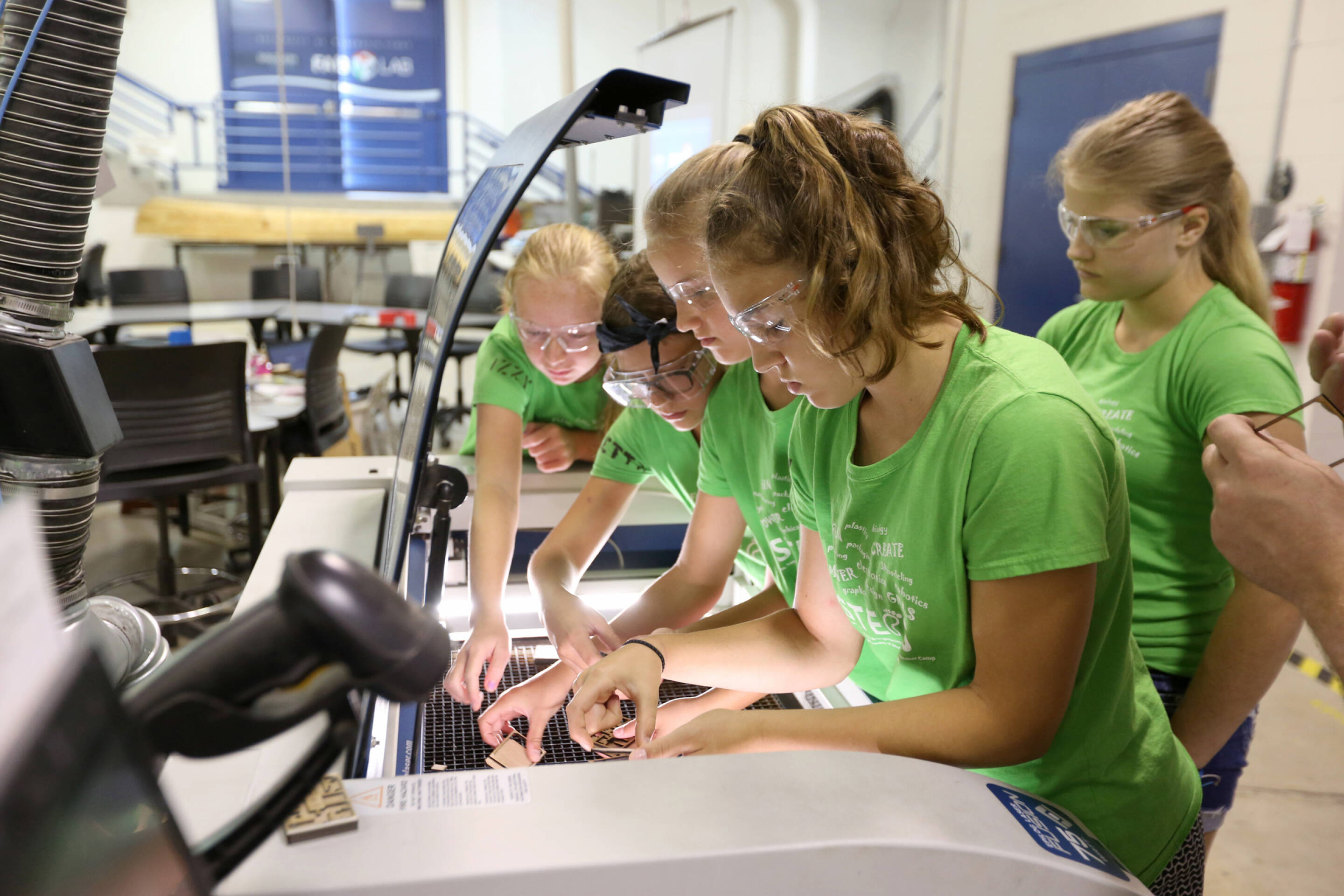 As a group of 10 girls in teal T-shirts assembled robots in a UW-Stout lab, Kari Berthiaume thought back to when she was in middle school. “I wish I had the opportunity to do something like this when I was that age. It’s a key time for them to explore some of these things,” Berthiaume said. Although Berthiaume never attended a weeklong science camp as a youth, she became a role model for the 160 girls who attended UW-Stout’s 21st annual STEPS for Girls camps over four weeks in July and early August. Berthiaume, of Colfax, recently was promoted to an Advanced Manufacturing manager for Andersen Corporation’s Research and Development organization at its headquarters in Bayport, Minnesota. In this new role for the national window and door manufacturer, she leads a team of engineers who are responsible for implementing new manufacturing systems at multiple company locations across the US. Previously, she worked for 10 years as a manufacturing engineer and three years as the engineering manager at the company’s window assembly facility in Menomonie after graduating from UW-Stout in 2002 with a bachelor’s degree in manufacturing engineering.

Having succeeded in the mostly male world of engineering, she was giving back at the camp by helping girls build their confidence in and consider careers in STEM (science, technology, engineering, mathematics) fields. Volunteer staff at STEPS included another 22 female engineers from Andersen, 3M, General Mills, Target, EcoLab and Nordson EDI, all of which generously gave their employees time off to help. In Berthiaume’s case it was four Tuesdays from 8am to 5:15pm. She was in the manufacturing lab, where girls finished their big project for the week, bug bots: saucer-size, remote-controlled robots. First, the girls learned about and made parts for the bots in other UW-Stout labs.

“This experience is empowering them to be confident, set their goals high and be able to achieve them. They’re learning life skills,” Berthiaume said.
During their two hours in the manufacturing lab with Berthiaume, girls also learned how to set up a manufacturing line. As an exercise, they first assembled pens, doing it much faster when they developed a team system. Their speed increased from assembling a few pens to as many as 18 in two minutes. “It’s very interactive. The girls are very engaged and positive. It’s been such a rewarding experience for me,” Berthiaume said.

Most of the professionals who volunteer at STEPS are women. The lab assistants and counselors include many female UW-Stout students. One of the instructors this year was Jessica Kuske, a 2015 technology education graduate from UW-Stout. She teaches at Ellsworth middle school and high school, where she encourages girls to try her classes.

“There are very few females in the high school technology classes. I try to get them interested at the middle school level and then continue. One of the reasons I went into teaching technology is that I was the only girl in some of my classes,” Kuske said.
According to the Society of Women Engineers, which has a chapter at UW-Stout, only about 12 percent of engineers in the U.S. are women. That number is virtually unchanged in the past 15 years.

“It would be great 30 years from now even if 50 percent of the employees in technology were women,” said Berthiaume, who also earned a master’s degree in technology management from UW-Stout in 2009.

STEPS stands for Science, Technology and Engineering Preview Summer program. About 3,300 girls have participated since it began on campus in 1997. Jo Hopp, a physics professor at UW-Stout, is the program’s director.

Sponsors, including UW-Stout, 3M, the Hampton Family Trust, Xcel Energy, and Polaris, among others, fund nearly 70 percent of the program.

Learn more about STEPS for Girls at uwstout.edu/steps.