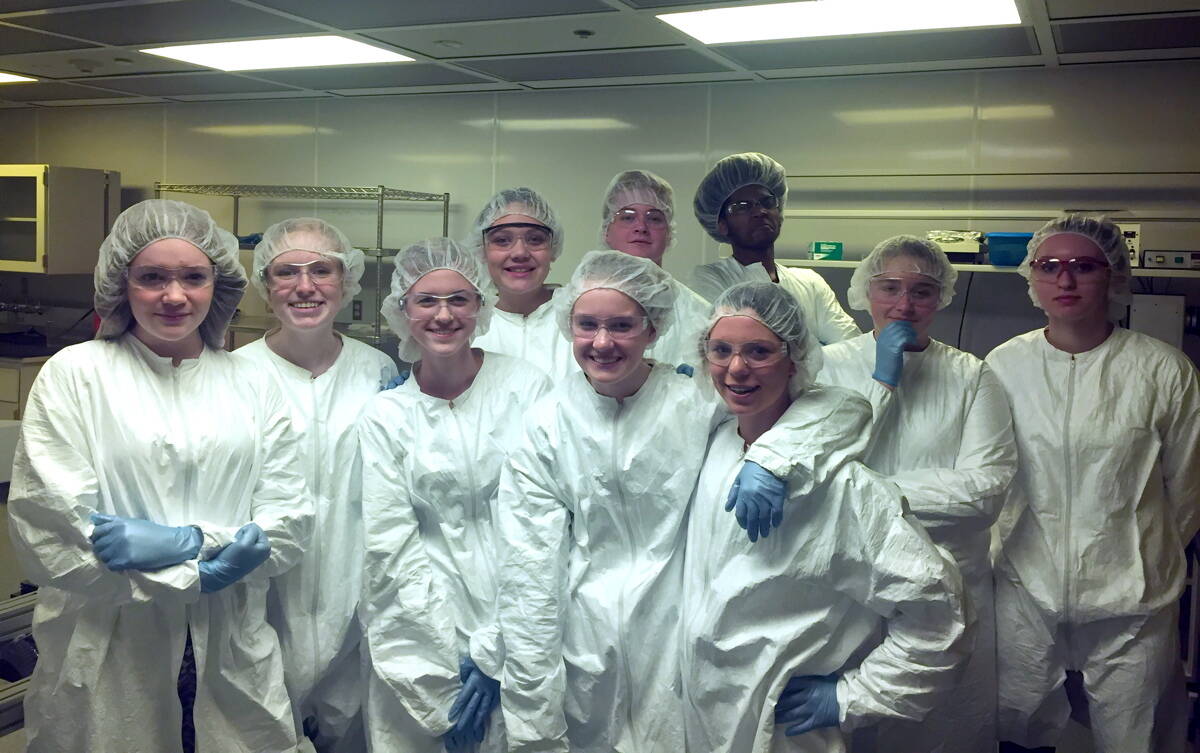 It wasn’t a typical school week Friday for Xavier Coolidge of New Richmond High School. By midday, he already had identified Wisconsin plants in a biology lab, performed chemistry experiments, and watched a packaging machine in action.

He was one of about 300 students from six area school districts who visited the STEM Festival, part of the Wisconsin Science Festival, at UW-Stout in early November.

“The analytical chemistry experiment was really cool, and we watched a packaging machine cut cardboard. It was a lot more interesting than it sounds. It made a cardboard dinosaur,” Coolidge said.

The STEM Festival was hosted by UW-Stout’s College of Science, Technology, Engineering, Mathematics and Management.

Although UW-Stout has held a Wisconsin Science Festival event two previous years, this was the first time busloads of middle and high school students came to campus for several hours of lab activities and displays.

They saw how a scanning electron microscope works. They also put on special gowns and entered the Jarvis Hall Science Wing clean room facility, a controlled environment for industrial processes.

The STEM Festival coordinator was Shelley Lee, STEM Outreach specialist for the college.

In Professor Ana Magdalena Vande Linde’s chemistry lab, groups of students were guided through an experiment in which they coated brass keys with copper using a copper sulfate solution and an electric current.

One of the high school teachers was Brittany Johnson, of Unity, based in Balsam Lake. She graduated from UW-Stout four years ago in the science education program. She was back in the lab where she had taken classes from Vande Linde.

Johnson was excited to bring Unity students to UW-Stout to expose them to aspects of science “we can’t offer them in high school.”

UW-Stout applied science student Ben Kerr, of Cumberland, volunteered to help the young students with the key experiment. The process is common in industry, where it is used to make silverware and jewelry and to chrome-plate auto parts.

“I tried to get them engaged,” Kerr said. “I had some eighth-grade kids and was walking them through college-level algebra. It’s neat to see them say, ‘Wow, this is the kind of stuff I could be doing someday.’ ”

One of those future college students could be Alexis Dargiewicz.

“I like science. I may try studying chemistry or physics (in college),” said Dargiewicz, a freshman at Unity. “All of these terms (I heard today) are way over my head.”

The STEM Festival included regional companies, such as Menards and Cedar Corp., offering information about careers in STEM fields. Also on hand was WiSys, which supports the creation and transfer of innovations from the UW System to the marketplace.

The Wisconsin Science Festival (wisconsinsciencefest.org), was founded in 2011 and is part of the national Science Festival Alliance. In 2016 more than 30,000 people attended 285 events throughout Wisconsin. In 2018, events will be held statewide Oct. 11-14.