I Can (Mostly) Do It by Myself 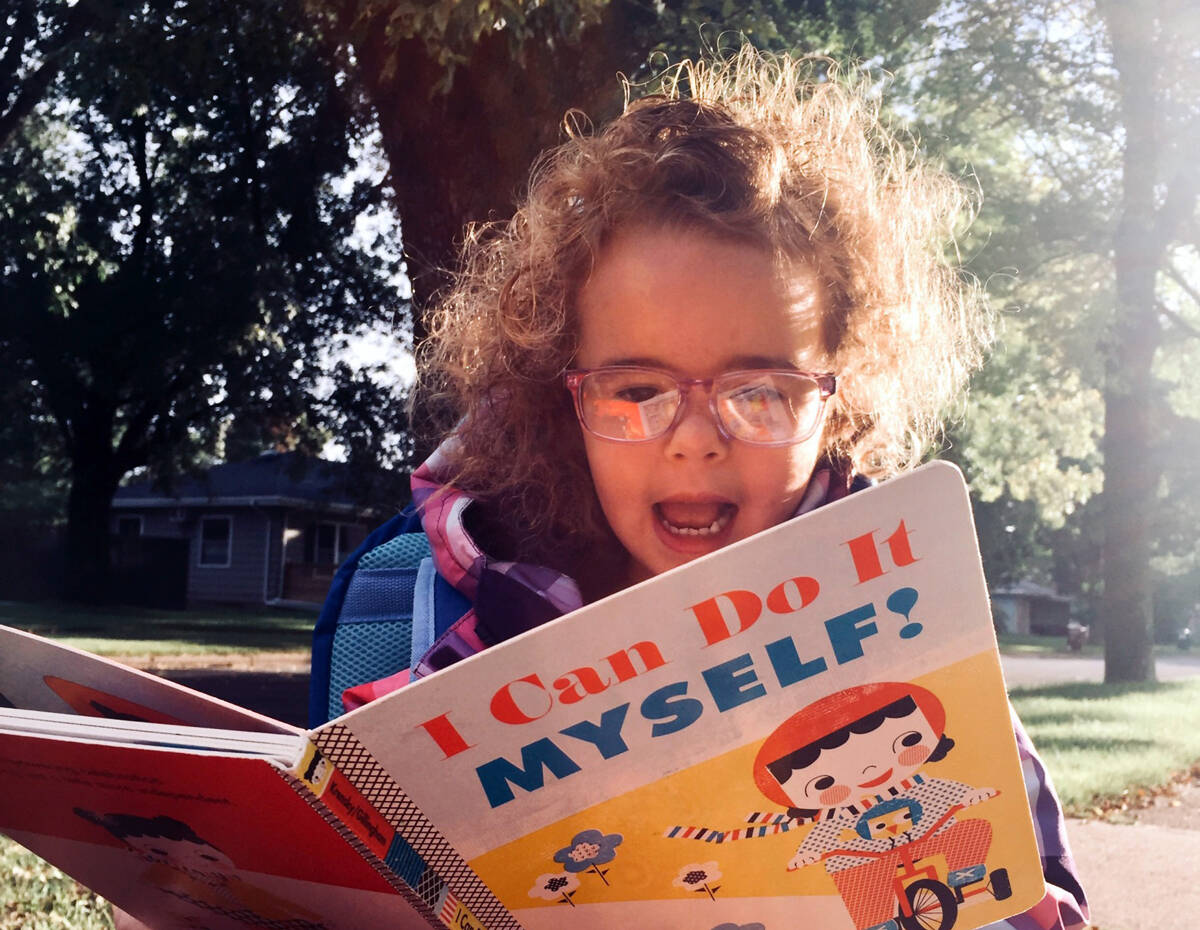 When Stephen Krensky wrote and published his 2012 children’s book, I Can Do It Myself!, 4-year-olds everywhere took the title as truth.

Not just truth, but a code for living.  After all, if the rosy-cheeked girl in the book could dress herself, and blow her own nose, and put herself to bed, then why shouldn’t they?

My own 4-year-old daughter certainly believed this to be true. We’d barely finished the book before Eleanor began assuring me that no task was too much for a woman as worldly as she.

“I can do it myself!” she screeched.

To her credit, she could – and only a couple of gallons were lost in the process.

Later, when I offered to help pick out her outfit, I received the same reply:

And she did that, too – and what’s the difference between tights and pants anyway?

In the weeks that followed, my newly empowered daughter took it upon herself to fix every problem she created.

Can’t reach the graham crackers on the pantry’s top shelf?

Feeling a bit under the weather? Here, take my bucket of vitamins!

Yes, it was a wonderfully complex time in the Hollars household. One in which my commitment to reaffirming my daughter’s newly discovered autonomy was tempered by the dangers that autonomy might bring.

Not that there’s anything wrong with teaching one’s children to be independent. But at the same time, I sure wish Krensky might consider publishing a companion book, perhaps with the title I Can Do Some Things Myself, But Asking for Help Is Perfectly Acceptable and There’s No Shame In It, And Probably We Should Consider Asking For Help More Often. Sure, it’s a little wordy, but the upside is that if you make it through the title, you needn’t actually read the book.

While these books (one real, one imagined) may seem to offer contradictory messages, in fact, I’d argue they’re quite complementary.

Sometimes we need to act independently, other times, not.

I’m reminded of my first day of college when, in an attempt to catch a terribly tossed frisbee, I dove headlong into the hard earth, fracturing my clavicle in the process.

No matter, I thought, I can do everything myself!

Perhaps the three-mile stroll to the hospital would give me an opportunity to see the town, I reasoned. And maybe the crushing pain that accompanied every step would help me build a little character!

Upon returning to school later that day, it became clear to me that perhaps I couldn’t do everything myself after all.  Navigating college was proving difficult enough, but it became more so with my arm in a sling.

Exhibit A: the school cafeteria.  There, my newly fractured state ensured that I not only dropped my fair share of trays, but that I dropped an unfair share as well. Maybe my fellow students worried tuition might increase as a result of all that wasted food; whatever the reason, eventually a few came to my aid.

“Want some help with that?” they asked.

Which is the story I tell Eleanor one afternoon as we sop up the next wave of spilled milk.

“Look, I know that you can do everything by yourself,” I tell her, “you have made that abundantly clear. But remember that you don’t have to. That’s why I’m here. To help.”

She stares at me with eyes as wide as the ocean.  At last, it seems, my message is sinking in.

“So … I don’t have to do everything myself?” she clarifies, reaching for a fresh paper towel.

I watch the gears churn in her head.

“That’s OK, Daddy,” she calls as she scampers off. “You can do it yourself!”

B.J. Hollars is the author of several books, most recently The Road South: Personal Stories of the Freedom Riders. He is an associate professor of English at UW-Eau Claire. Learn more at bjhollars.com.