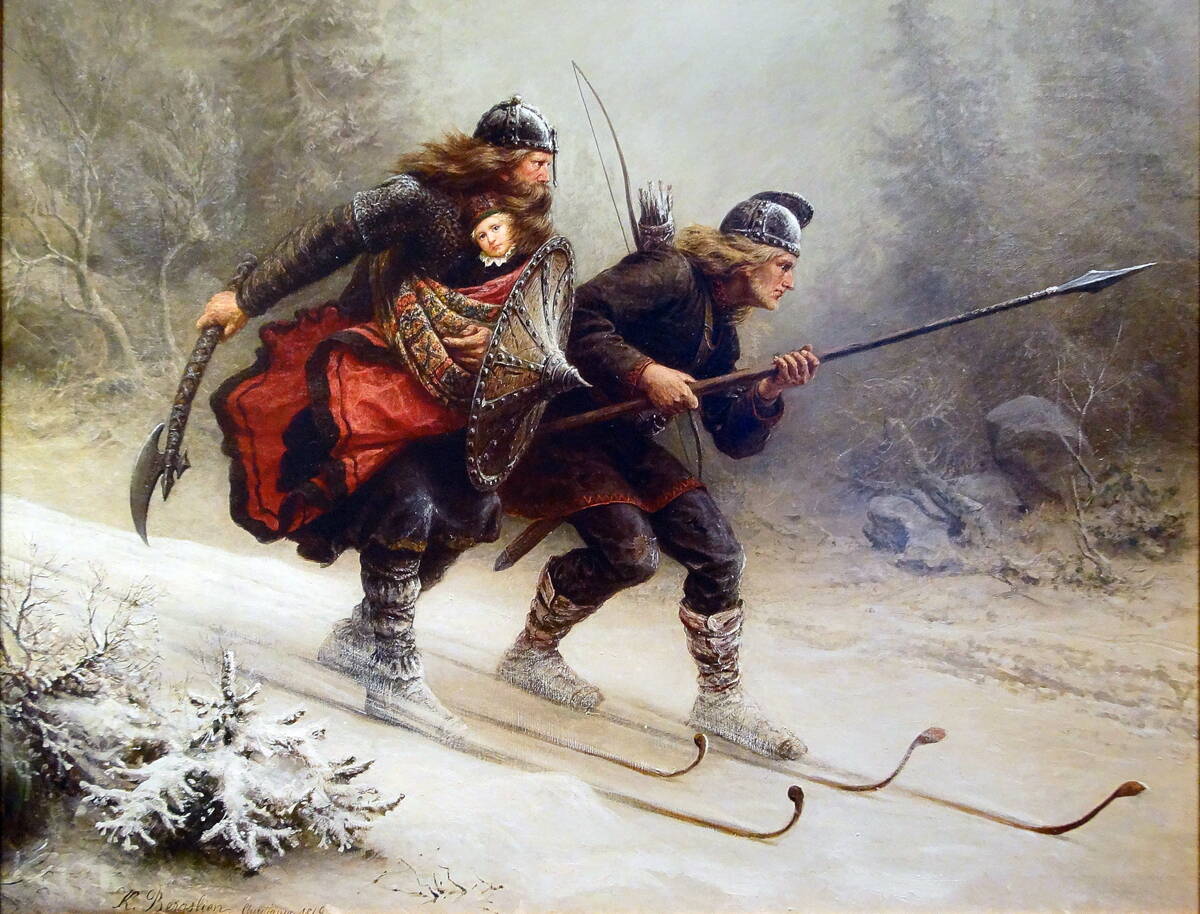 The original Birkebeiner racers (with baby!) in a 19th-century painting

More than 800 years ago, Norway was caught in a civil war. Two groups fought over who should rule the country. The ruling party made fun of the rebels by calling them Birkebeiner (“Birchbarkleggers”), because they wrapped bark around their legs to stay warm and protect them in battle.

In the winter of 1206, the 18-month-old prince who the Birkebeiner supported as the real ruler was in danger. Prince Haakon Haakonsson and his mother, Inga, hid in Lillehammer. They were about to be captured. Two birkebeiner warriors carried Prince Haakon as they skied 34 miles (55 kilometers) through forests and over two mountain ranges to safety. Prince Haakon was later crowned king of Norway, which ended the civil war.

Although “birkebeiner” started as pejorative – an insulting term – the warriors embraced the name as their own. Because of their bravery in battle and their fearless flight with Prince Haakon, the word has come to mean someone who can withstand adversity.

In other words, they reappropriated “birkebeiner,” turning it from an insult to something they embraced to identify themselves. Many words have been reappropriated, such as Yankee, Prostestant, and even impressionist (as in the style of painting).

Today, the flight of the birkebeiner warriors is remembered in challenging cross-country ski races around the world, including the largest ski race in North America, the American Birkebeiner (also known as the Birkie), which goes from Cable to Hayward in northern Wisconsin. In addition to the competitive races, Birkie weekend also includes a kids’ race, a giant ski race in which teams of six ski on the same pair of giant skis, a dog race, and other fun events.

If you go to the Birkie, watch for skiers dressed as the two Norwegian warriors, Torstein and Skervald, escorting Prince Haakon’s mother Inga through the longest race. They carry a baby across the finish line, remembering the brave actions of the original Birkebeiner.