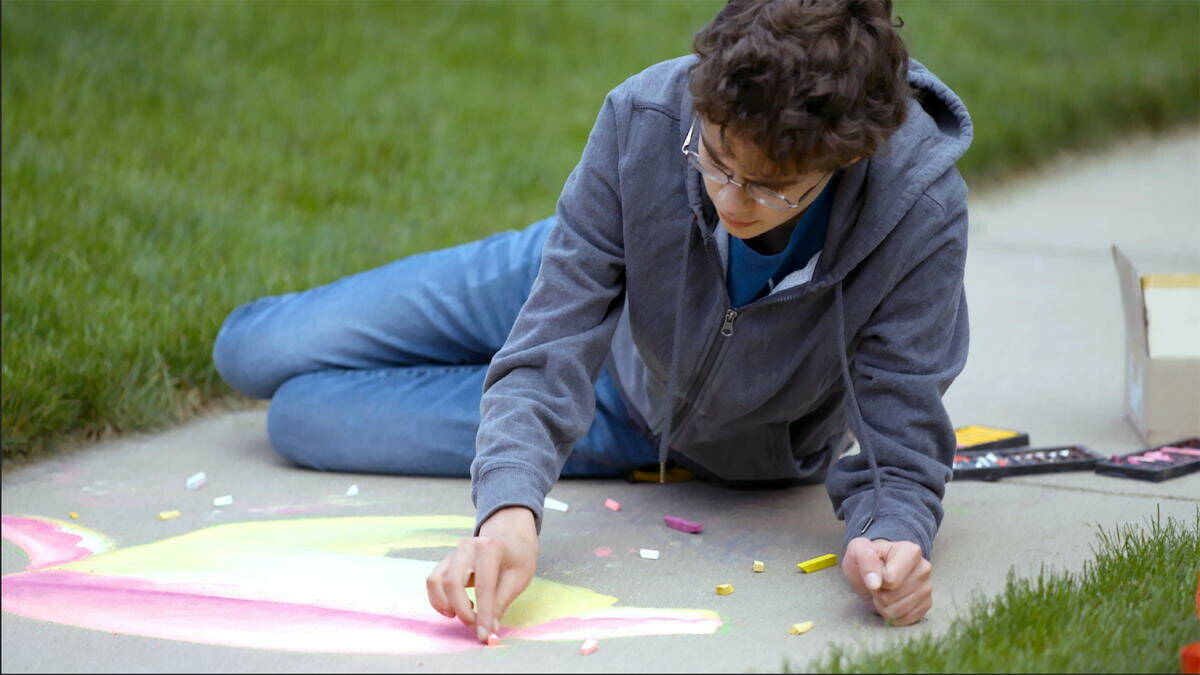 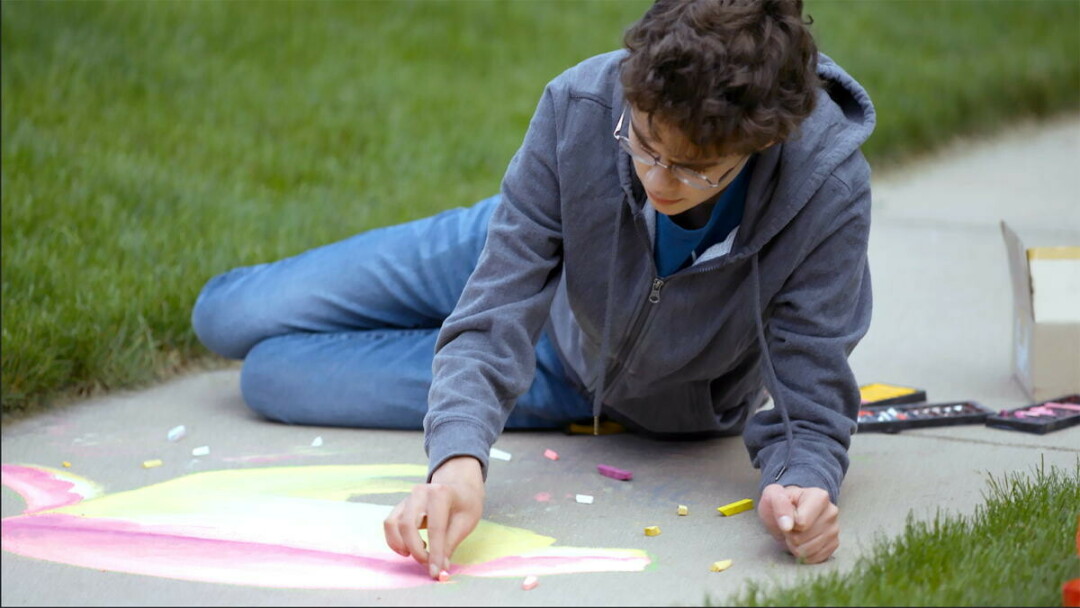 Have you ever wondered what a mushroom-bird looks like? Or an armadillo fused with a birthday cake?

These are the kinds of bizarre and quirky questions 15-year-old Henry Loomis considers in his sidewalk chalk masterpieces, which have given him the neighborhood nickname “Third Ward Banksy.”

“He does these kind of whimsical creatures that he invents,” said Jill Markgraf, a Third Ward resident. Markgraf calls Henry’s work a “departure of reality,” naming him a “connoisseur of concrete.”

Henry, son of Jon and Allyson Loomis of Eau Claire, began seriously chalking at the age of 12 at Chalkfest, a sidewalk chalk event hosted by Volume One and UW-Eau Claire.

“Chalk is a very ornery medium,” Henry said. “It’s not very easy to control, and it’s difficult to erase your mistakes, so it’s not really something that I found to be fun at first. I’ve begun to enjoy the medium more as I’ve practiced it and have started to understand how it works. You can’t erase, but you can blend colors easily, and sometimes that makes the picture better.”

“Neighborhood chalking is pretty low-stakes, I feel. It’s like folding a poem into a paper boat and setting it adrift. If I don’t like my work, it’ll be gone in a few days.” –Henry Loomis

For Chalkfest or neighborhood chalking, Henry usually decides what to draw based on a digital drawing he has already done. He has a large compilation of “small animal-object fusion pictures” that he designs on an iPad Pro, and he picks a fun one from his collection to draw on the sidewalk.

“Neighborhood chalking is pretty low-stakes, I feel,” he said. “It’s like folding a poem into a paper boat and setting it adrift. If I don’t like my work, it’ll be gone in a few days.” 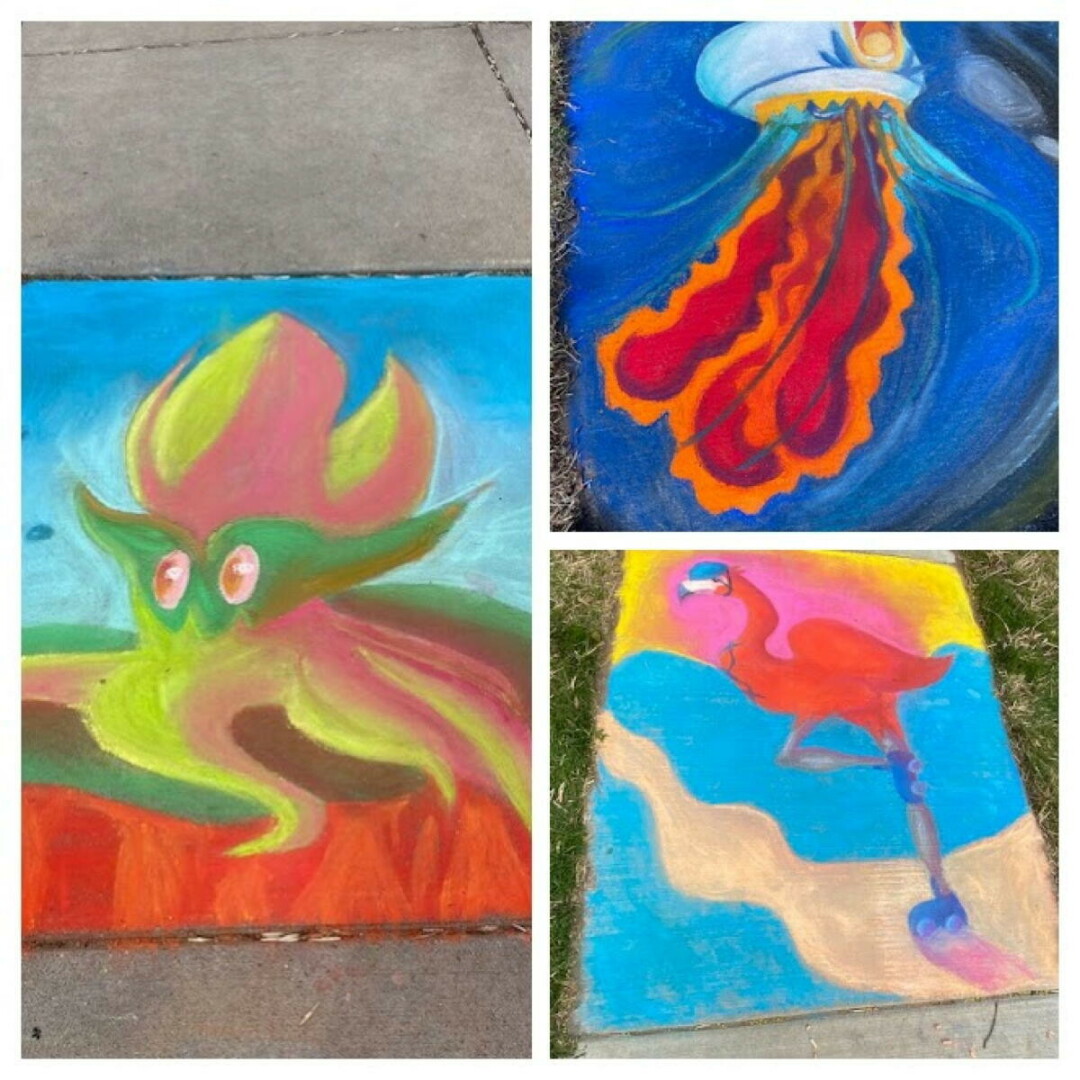 When Henry created a sidewalk masterpiece for Markgraf, he drew a platypus-like creature. Often, neighbors in the Third Ward will post photos of the art on social media. Whenever Markgraf spies a picture of Henry’s chalk art on Facebook, she makes it an adventure to go find it.

“I’ll make it part of my daily walk,” she said. “All of a sudden, there’s this square of delight.”

Walking, Henry said, is something that many people find themselves doing when they have nothing else to do during quarantine.

“When they’re out walking the same block for the 50th time, I just want people to be surprised and to see something cute or strange,” Henry said.

Allyson Loomis, Henry’s mother, said his sole purpose is to cheer people up.

“I’m pretty proud of him,” she said. “Neither Jon nor I can so much as doodle. Henry must have picked some recessive gem from the genetic grab-bag because he’s been drawing, perpetually, since he could hold a crayon.”

When it comes to the future, Henry hopes to continue spreading joy through quarantine by drawing with chalk. He says he is working on a series of digital drawings of 40 Egyptian gods, which he would like to finish. The distant future?

“I guess my dream would be to work in concept art,” Henry said, “but who knows?”

Henry Loomis is among dozens of artists taking part in this year’s Virtual Chalkfest. Beginning June 19, you can see – and vote on – their work online at volumeone.org/chalkfest.