Watching the River, Learning From the Fish 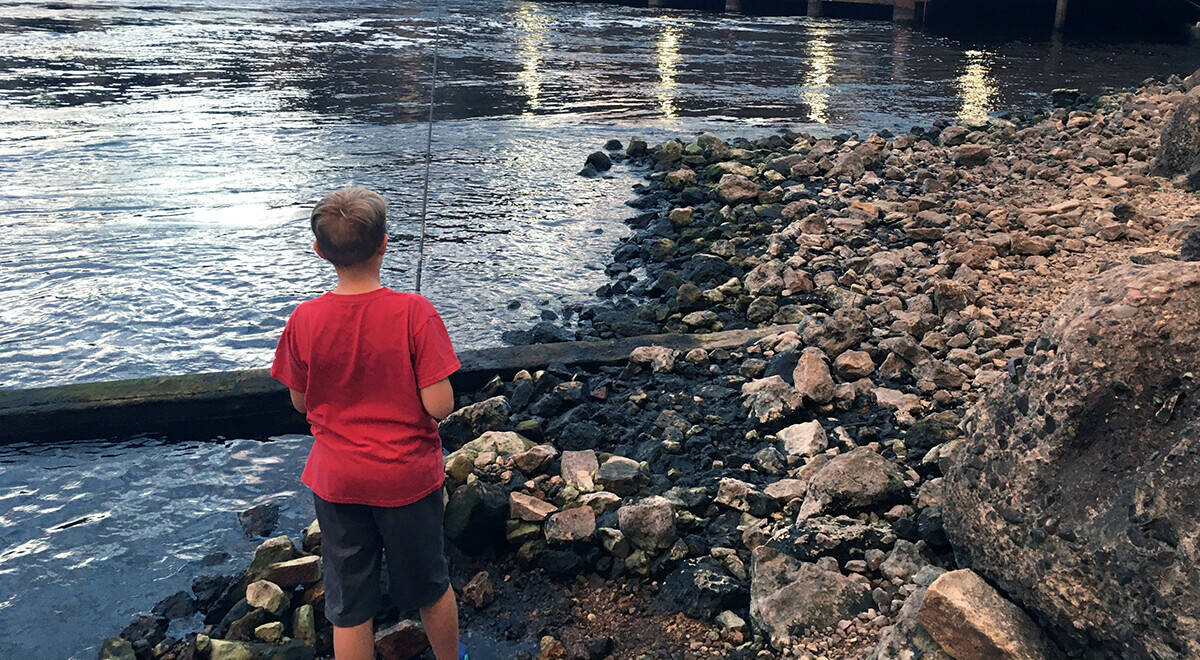 Somewhere, in a dusty photo album of my childhood home, there’s photographic proof that I once caught a fish. I’m about 9 years old, and the smile on my face is probably larger than the fish itself, which is comically small. I’m sure my grandfather, who had taken me fishing on a lake near Janesville, tossed it back as soon as the photo was taken.

I don’t actually remember the incident in the photo – I am, to be clear, not a fisherman by any stretch of the imagination – but I do remember spending a handful of relaxing days with my grandparents at the campground during my childhood: cooking hot dogs on the fire, splashing in the sun-dappled water, flying kites. The kinds of things kids are supposed to do during the hot, lazy days of summer vacation – days spent without a care in the world (at least until the popsicles run out).

We may live amid a unique set of historic circumstances – most of them unenviable – in the year 2020, but the river has seen far more than we can comprehend. For centuries – millennia, really – people have gathered along its banks to seek sustenance, companionship, and moments of peace and clarity.

Despite living their young lives in the shadow of a pandemic, my own children have spent some relaxing, sunny summer days like that. Over the years my family has joined my in-laws, proud owners of a pop-up camper and lifetime senior passes to the national parks, on a number of camping trips. My in-laws are cut from decidedly more adventurous stock than I am (I’ve half-joking described myself as an “avid indoorsman”), but I’m pleased to say that some of my in-laws’ outdoorsiness has rubbed off on my kids.

My inherent indoorsiness explains the fact that, despite living in a place as filled with lakes, rivers, and streams, I have never taken my son fishing. However, fortunately for him, a similar fish-toting photo of him exists. A couple of summers ago on a canoeing trip with the extended family, he was handed a pole by a cousin, cast into a lake, and almost immediately caught a panfish. Beginner’s luck immediately led to bragging rights amid the gaggle of cousins.

This past summer, of course, has been unlike any in my son’s life, or my own. But with indoor spaces largely off limits, the Great Outdoors have been there. While we had no grand camping trips, there have been long bike rides and mornings at Lake Altoona Beach and afternoons at grandpa’s orchard.

There was a memorable evening on the river, too. We recently met a family who had just relocated to the neighborhood, were looking to make friends in a new town amid a pandemic, and – crucially for those of us in a certain stage of parenthood – children of compatible ages, genders, and temperaments.

The father and son are avid fishermen, and one evening they invited us to meet them at a “secret” spot for some evening sturgeon fishing. I won’t divulge the location, other than to say it’s on a local river near a dam, and that reaching the parking area felt a bit like trespassing (although, based on the signage, it wasn’t).

I was, to be sure, a proverbial fish out of water on this little expedition, but the riverside is a welcoming place at twilight. While the other father filled me in on the particulars of sturgeon fishing, my son and his new friend gamboled across the rocks, practiced casting a bobber-laden line, and chattered away. As the sun slipped toward the horizon, the evening took on a timeless quality. We may live amid a unique set of historic circumstances – most of them unenviable – in the year 2020, but the river has seen far more than we can comprehend. For centuries – millennia, really – people have gathered along its banks to seek sustenance, companionship, and moments of peace and clarity.

I’m not a licensed fisherman, so other than casting a couple of times – successfully casting, I might add, in that I didn’t accidentally snag myself or another person – I simply observed. The only bites I experienced were from mosquitoes.

Some of the actual fisherman had some luck, and over the course of a few hours I got to see a number of bass, catfish, and even a small shovelnose sturgeon reeled in and quickly released. Our host was apologetic that we didn’t get to see any of the truly monstrous sturgeon that lurk in the dark waters of the river, but I was content to imagine that they were there, just out of view, their instincts keeping them away from dangling hooks.

For my son and I, the shovelnose sturgeon was impressive enough: about a foot long, nose like an upturned shovel, body like a torpedo, bony ridges on its back that emphasized its status as a “living fossil.” Sturgeon, I later learned, evolved more than 100 million years ago, meaning they’ve been living in Wisconsin far longer than human beings. And not just as a species – some individual sturgeon have been around longer than any of us: Back in 2012, the Wisconsin DNR tagged and released a 7-foot, 3-inch lake sturgeon near Shawano who was estimated to be 125 years old.

It’s possible that, right here in the Chippewa Valley, there are fish larger and older than any of us, fish for whom political shifts, social conflicts, and even pandemics have flowed by like water. I don’t need a snapshot of myself holding one of them to know this, or to take some comfort in the fact that these creatures have survived upheavals we can’t even imagine.

If the fish can do it, I tell myself, so can we.

Tom Giffey is one of the editors of Chippewa Valley Family.