in the beginning, this columnist got there first 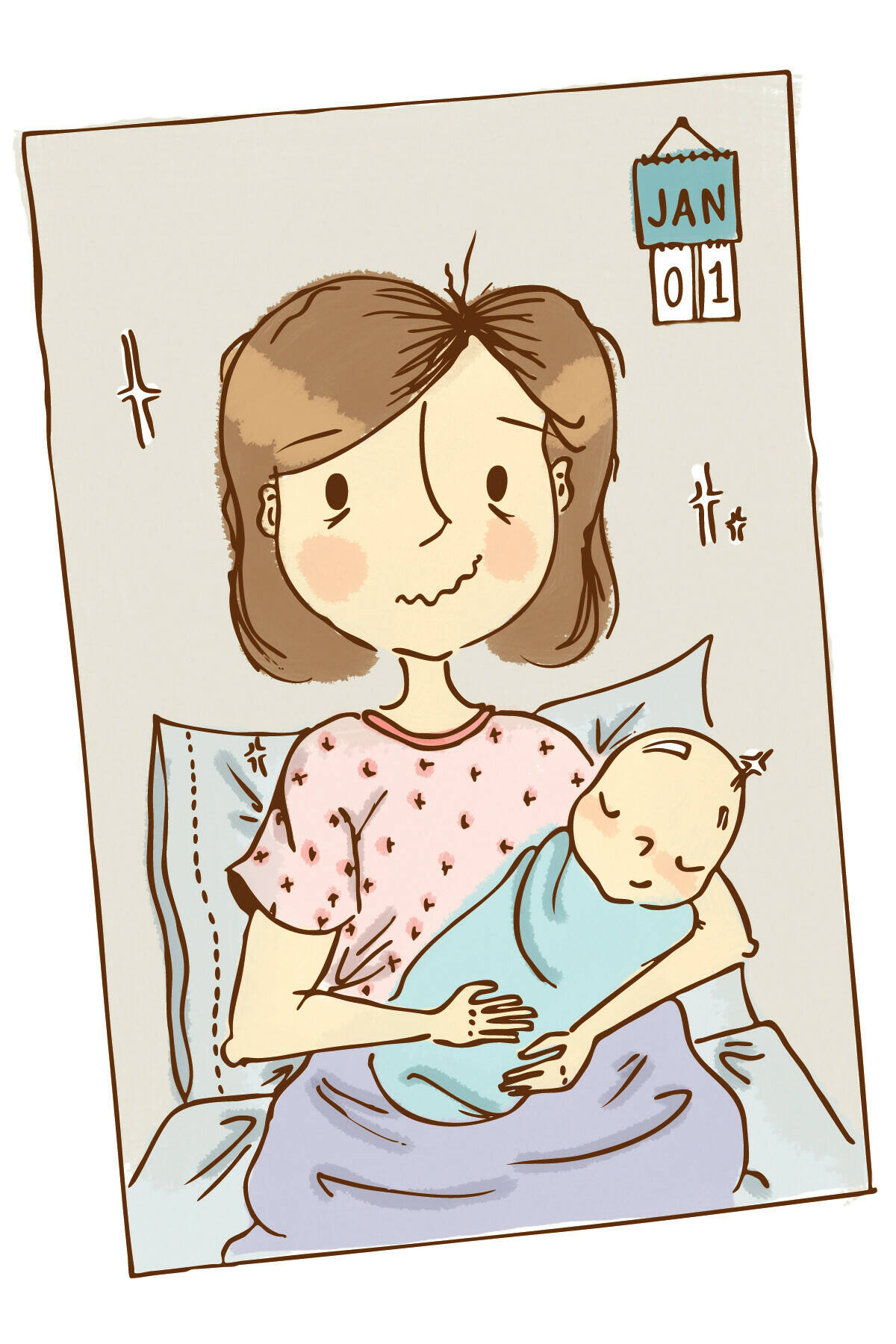 Somewhere in my parent’s house, deep in a box in the basement, there’s a newspaper clipping. A grey and white photo and its caption. It shows a young woman on the very first day of 1976. She looks tired. She looks like she wasn’t really ready for a newspaper photographer to show up at the door, ask her to smile, and take her picture. She’s sitting up in bed. And she’s holding a baby.

Spoiler alert. I AM THAT BABY. Only back when this photo was taken, I was way smaller, I had a lot less hair, and – as you may have guessed – I was freshly birthed.

Mom and I both were a little out of sorts, although Mom at least had been through childbirth before, with my older sister Sarah. However, as I very much enjoy pointing out, Sarah didn’t have a newspaper man show up just because she was born.

It was dumb luck, but I’ll take it. I was a New Years baby.

On Jan. 1, 1976, I was the first baby born in Monroe, Wisconsin. And for about 10 seconds, or however long it took the average Monroe-ian to read a two-sentence caption, I was a minor celebrity. And my mom and dad? Well, they’d just won a big contest.

I think we can all agree that, in this big, kooky contest we call “Life,” my parents won the ultimate grand prize just by having me as their kid. But the contest to which I’m referring was staged by the local paper. My parents won all kinds of prizes because I happened to pop into existence after all of the clocks in the middle of America had ticked past midnight. And no else in Monroe had.

On Jan. 1, 1976, I was the first baby born in Monroe, Wisconsin. And for about 10 seconds, or however long it took the average Monroe-ian to read a two-sentence caption, I was a minor celebrity. And my mom and dad? Well, they’d just won a big contest.

They won practical things like diapers. But if memory serves, they also won some pizza and beer. I’m a little fuzzy on the details, but let’s just go ahead and say they also won jewelry, a washing machine, a wine chiller, a high fidelity stereo system with massive knobs, and I don’t know, maybe a brand new Buick LeSabre or something (they did not win a brand new Buick LeSabre). In short, as soon as I was born, my parents owed me. Big time.

Not really. My mom was the real hero that night.

Anyway, a few months after I was born and Mom and Dad scored all that sweet booty, we moved away from Monroe, and I don’t believe I’ve set foot in that fine little town ever since. Honestly, there’s a good chance I never actually set foot in Monroe when I lived there, as I mostly laid around and drooled at the time.

Now, I’m not sure if you believe in luck (I mean, we barely know each other), but I personally believe that I’ve led a very lucky life. I know great people and I seem to just kind of fall into interesting opportunities. So perhaps something magical happened on that chilly night back in the 1970s.

As people partied at the local bars and raised their cups to the new year ahead, perhaps a giant wave of hopeful energy rose up and then poured down from the starry sky, flooding the hospital at the very moment I came into the world. Maybe I was born already wrapped up in a blanket of luck.

But one thing’s for sure. When I see that old newspaper clipping and look at my young mother’s face, at the “OK, am I smiling? Is my hair OK? Can you please leave now?” look in her tired eyes, I’m absolutely filled with gratitude for all of the good things in my life and especially the people who’ve provided me with so much warmth and care.

Mike Paulus is a writer, father, and longtime Eau Claire resident. This column originally appeared in Volume One, where Mike has written The Rear End column for more than a decade.