May the Toys Be With You: Museum Exhibits Classic ‘Star Wars’ Toys

yes, these are the droids you're looking for – and they're on display through Dec. 31 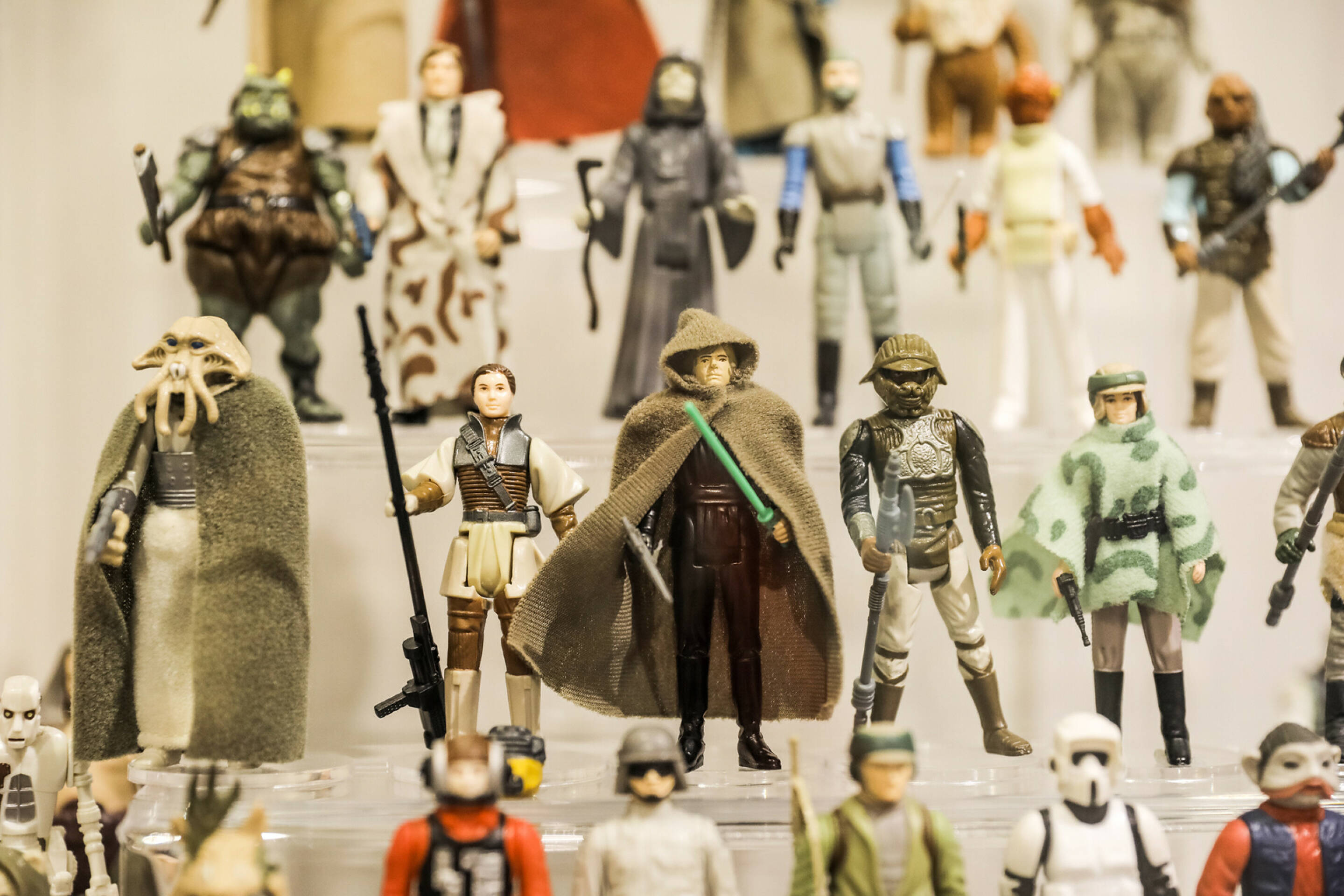 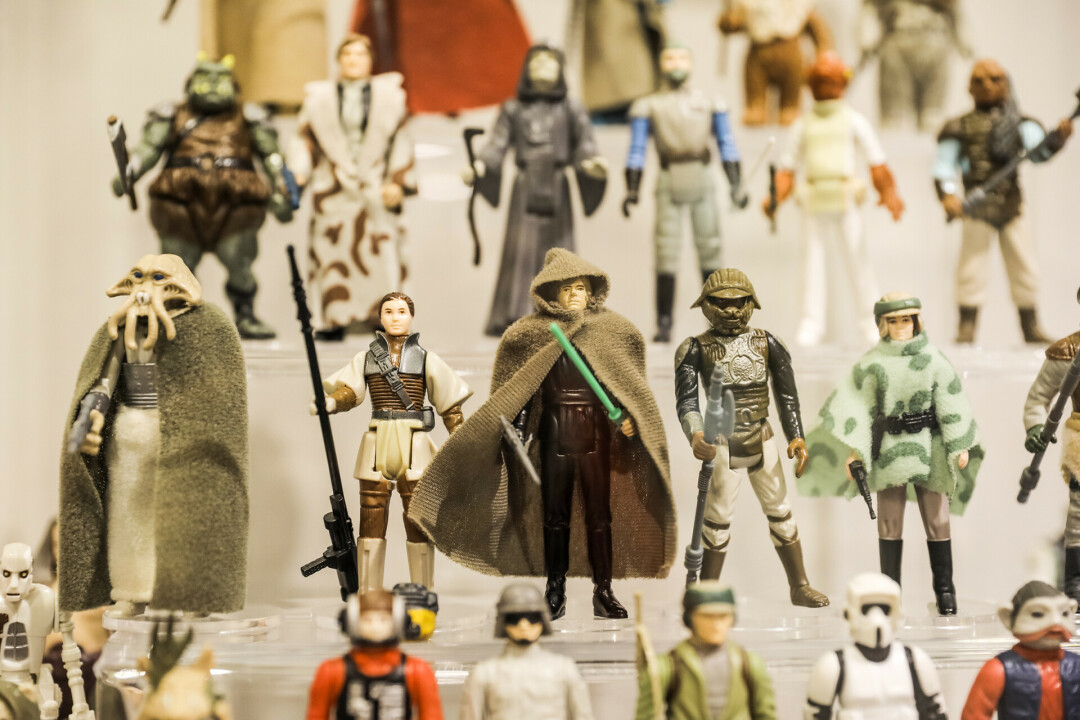 THESE ARE THE DROIDS YOU ARE LOOKING FOR. "The Nostalgia Awakens," a new exhibit at the Chippewa Valley Museum, features every classic Star Wars action figure ever made by Kenner between 1978 and 1985.

On a crisp fall evening I swept through the front doors of the Chippewa Valley Museum with a mission: Instead of turning toward the exhibits detailing the area’s fur trade, logging, or agricultural history, I walked into a gallery filled with objects that were simultaneously relatively recent and from long ago in a galaxy far, far away.

Yes, these were the droids I was looking for. Droids, as well as Jedi, Storm Troopers, bounty hunters, and all manner of creatures from locales as diverse as the Mos Eisely Cantina to the Forest Moon of Endor. These characters, as well as their vehicles and assorted environments, are part of “The Nostalgia Awakens,” a new exhibit that will fascinate fans of the Star Wars saga no matter their age. 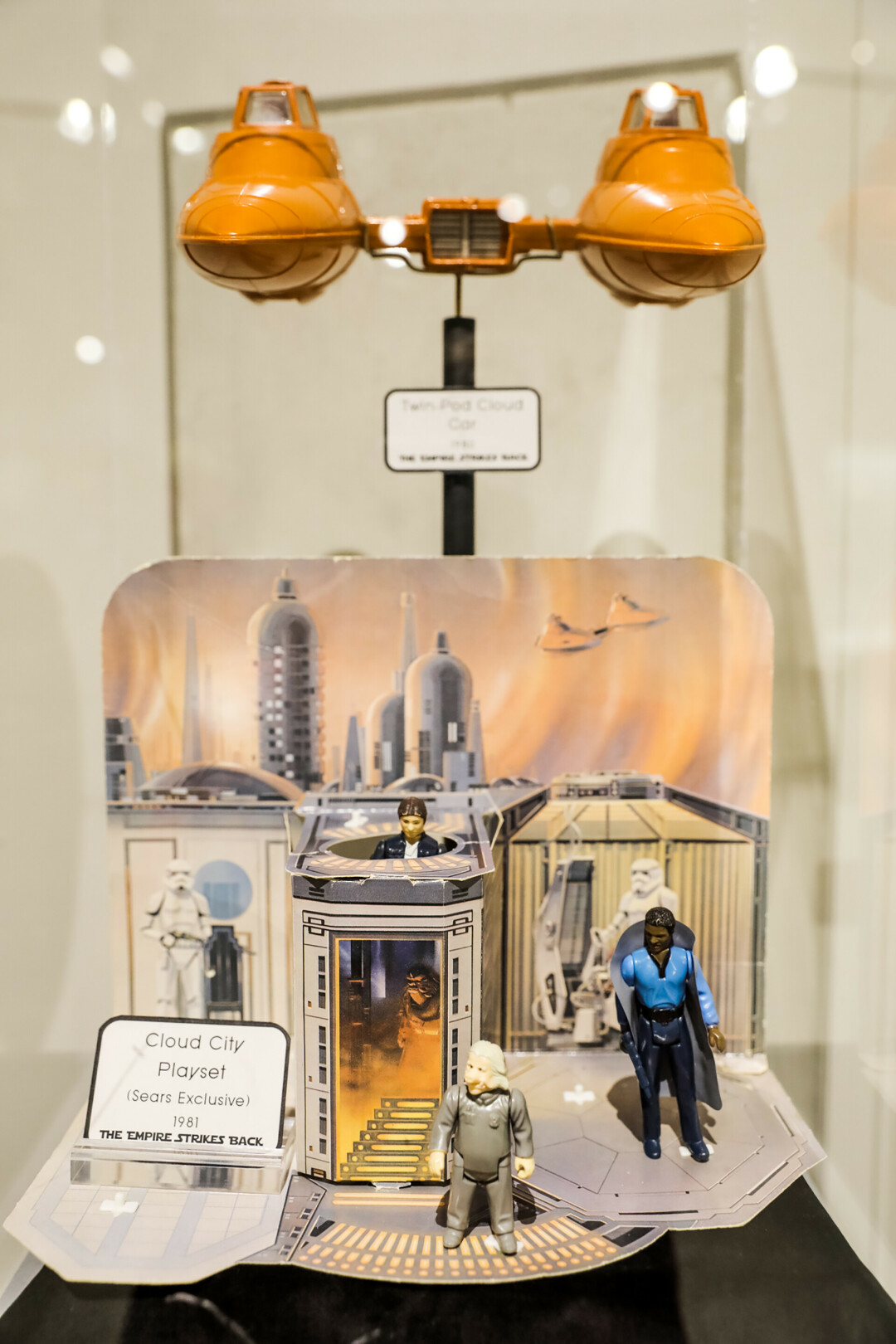 The exhibit, which runs through Dec. 31, features every classic Star Wars action figure made by Kenner between 1978 and 1985 and based on characters from the original Star Wars trilogy. That’s 100 unique action figures – from the well-known (Luke and Leia) to the obscure (Yak Face, anyone?), plus 19 vehicles, 13 play sets, and five large creatures.

For those of us who dreamed of such treasures under our Christmas trees in the 1970s and ’80s, the force of nostalgia is strong here. The collection belongs to Jarrod Roll, who as a young child remembers seeing the very first Star Wars film at the theater in Hartford, Wisconsin, in late 1977.

“I left, like most kids did, super excited by the movie,” recalled Roll, who grew up to become both a lifetime Star Wars fan and a museum curator. 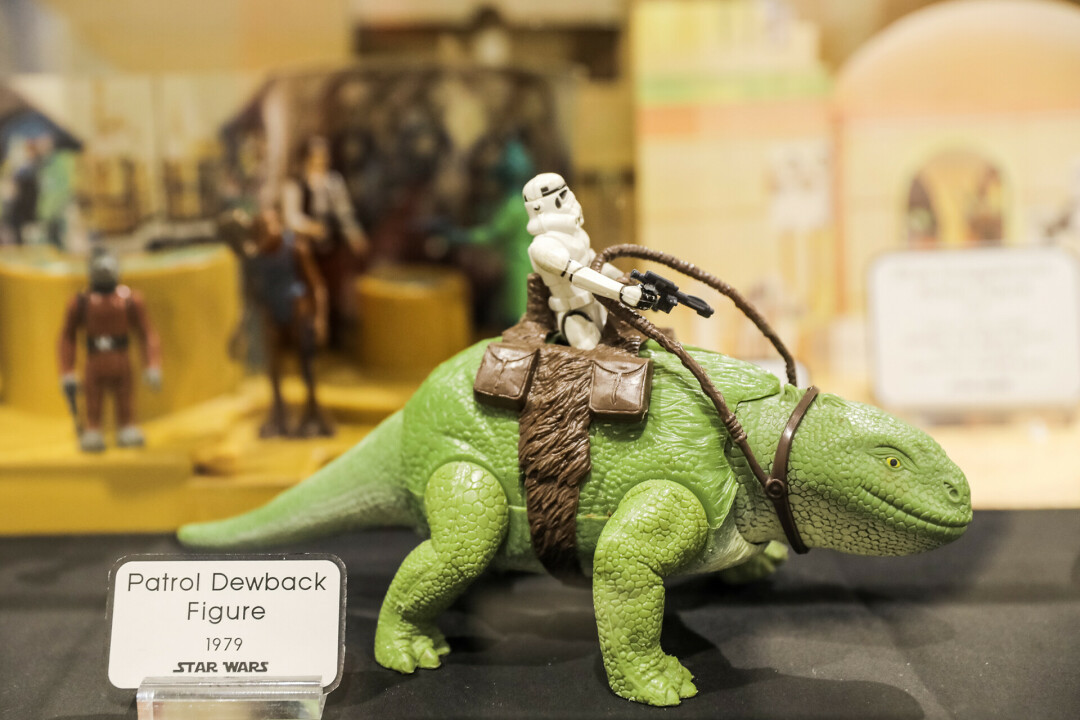 And while the movie’s unforgettable characters lived on in his head, they didn’t make it to his toy box – at least right away. With a few exceptions – such as Disney films – movies aimed at kids in the 1970s usually didn’t have a lot of licensing agreements, Roll said.

In fact, during the 1977 Christmas season there were no Star Wars toys available at all: The film’s smash success was a surprise, and action figures of Luke Skywalker & Co. hadn’t been made or shipped yet. Instead, parents had to wrap up “Early Bird Certificate Packages” – essentially a cardboard envelope that served as an IOU – and hope their kiddos weren’t too upset on Christmas morning.

Toys came for “Early Bird” buyers later in 1978, and eventually Roll and millions of other kids could buy Darth Vader and Han Solo in stores, too. By the time The Empire Strikes Back hit theaters in 1980, Kenner had its act together, and the stores (and young fans’ holiday stockings) were filled with tie-in toys. The same went for the final installment of the trilogy, Return of the Jedi, in 1983. The result was a series of imaginative tales and imagination-inspiring toys. 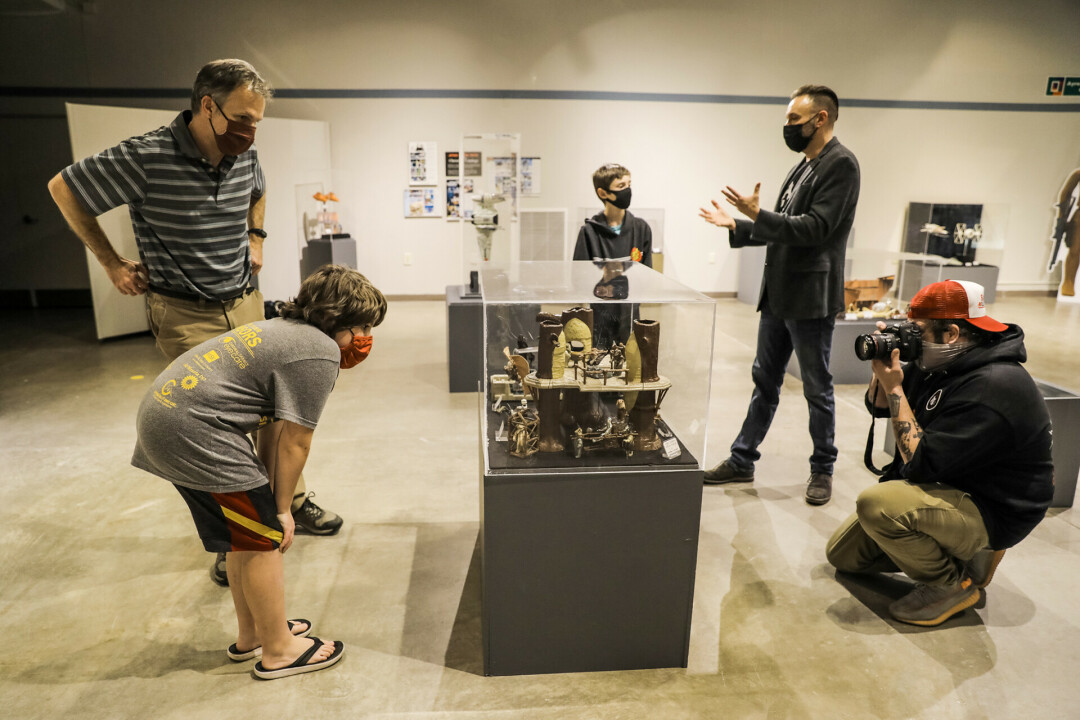 But nostalgia isn’t the only story here. Like the films themselves, there are multiple themes: The exhibit highlights how the media and entertainment landscapes have changed in the nearly 45 years since the original Star Wars hit theaters.

In the years since, merchandising has taken on a powerful – arguably dominant – role in how movies and TV shows are made and sold. And tried-and-true franchises like Star Wars and Marvel – with their sequels, prequels, and spin-offs – have come to dominate much of the entertainment we consume.

The private collection became a public exhibit a few years ago when the Star Wars film series was revived with The Force Awakens. A colleague of Roll’s at the Monroe County History Room & Museum in Sparta suggested that he display the toys in a temporary space at the museum. Initially, Roll hesitated. “Does something like this have a place in a museum?” he wondered. Ultimately, he decided it did. Roll contends the toys have just as much place in a museum as rusty farm implements and sepia-toned photos. 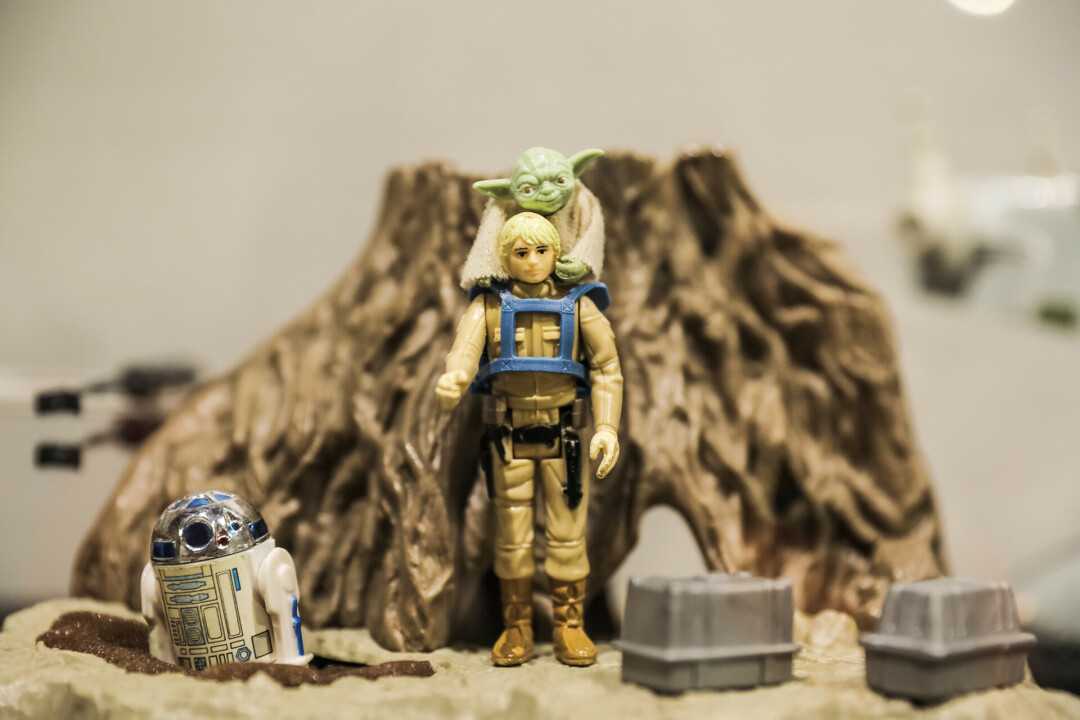 And stories are what you’ll remember – and hear – if you explore “The Nostalgia Awakens.” During my visit, the room was buzzing with Gen Xers like me and their children, reminiscing over the toys they either had as kids or wished they had now.

Like the mysterious Force itself, nostalgia is what binds us together. 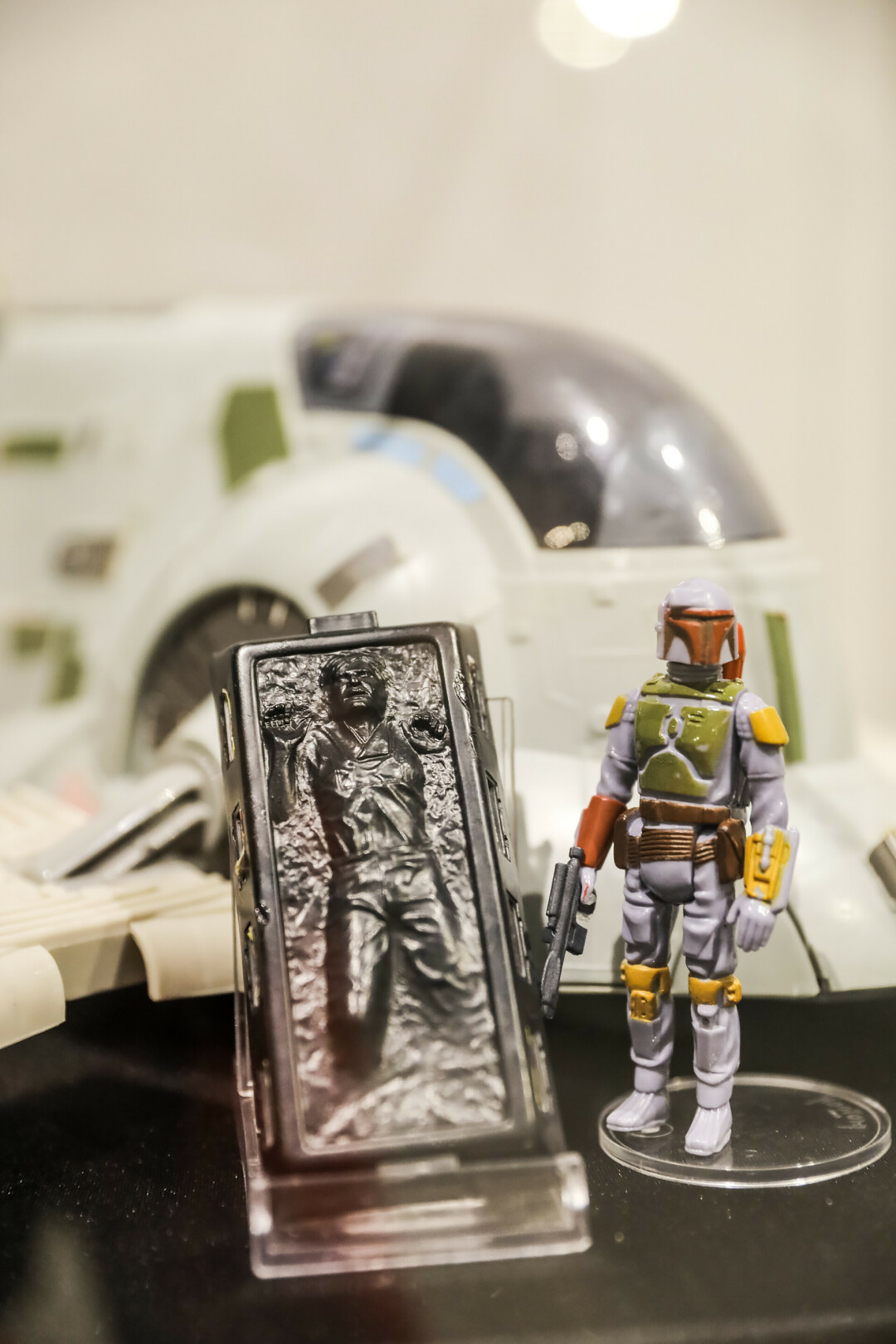 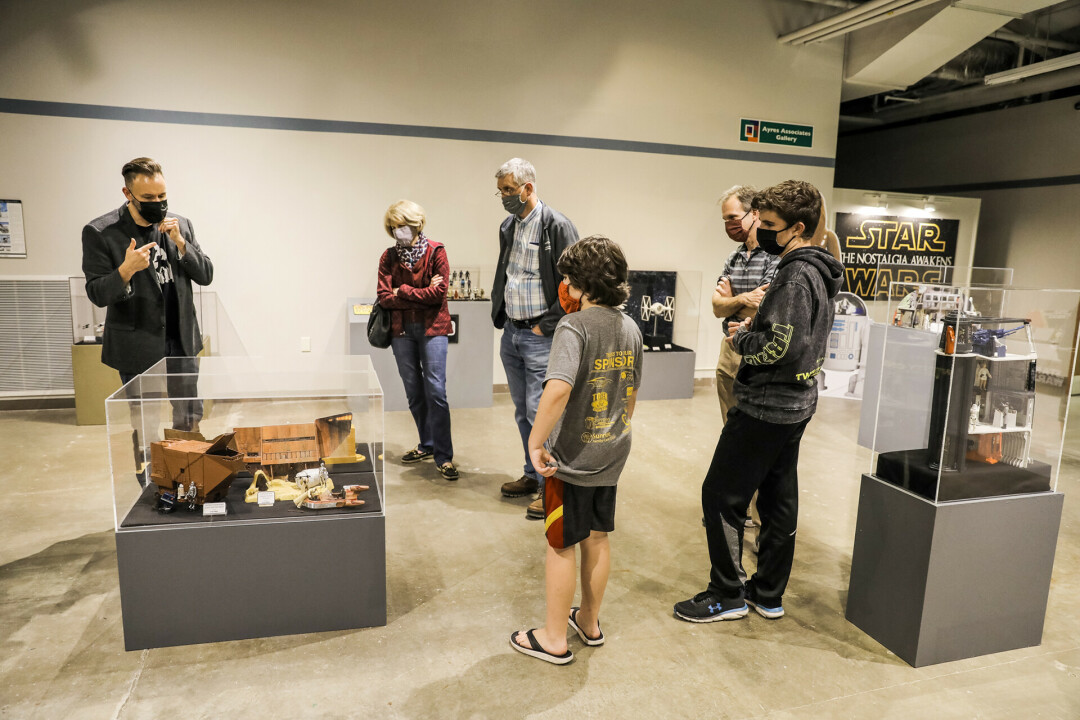