Column: The Roots Beneath Our Family Tree 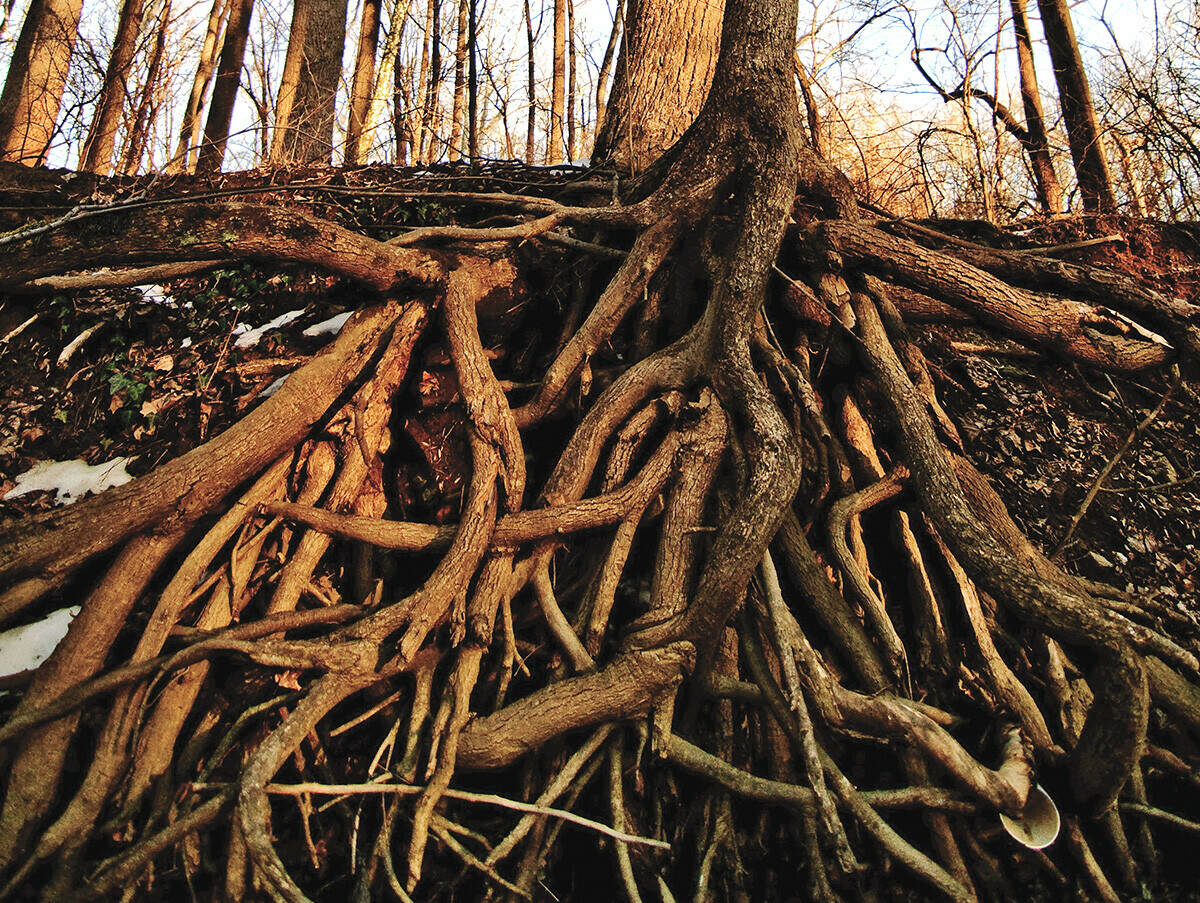 Last spring we cut down a mammoth white pine tree that overshadowed our home. We had been advised that the towering tree was a danger to the house: It stretched uncomfortably close to the garage, dropped branches from above, and threatening to undermine the foundation from below. We lived in fear of its massive bulk coming down on us in a storm.

The decision to cut our family’s tree was not without melancholy. My kids had grown up playing under the tree, pushing through its mounded needles with toy trucks, and enjoying the antics of the squirrels who made their home in its branches. The day before the tree crew came, the kids posed for photos next to the massive trunk.

After the crew did its work and trucked away the literal tons of wood, we were left with a bare, sawdust-covered patch of earth. As I inspected it, contemplating how best to plant grass, I noticed a few stray roots sticking out of the dirt here and there. Determined to remove them to ensure a smooth surface, I grabbed a few tools and began to dig, pull, and snip.

What at first appeared to be a few stray tendrils turned out to be much more. I dug and pulled and sweated and swore and gradually began to realize the extent of the problem I was dealing with. Out of curiosity, I pulled out the hose and sprayed away the dirt, which soon receded to reveal the enormity of the remaining stump and the tangle of roots that emerged from it. I recalled something I’d once heard about the size of a tree above the ground being roughly equivalent to the size below. Whatever the validity of this folk wisdom may be, it appeared to be close to the truth in this case. With such roots, I wondered, could any storm have toppled the tree?

This white pine may have been our family’s tree, but our family maintains another kind of tree as well. This one exists online, uploaded to a genealogy website by my late father, and occasionally tended by his descendants as relatives are born, die, or get married. Over the years, Dad’s work grafted hundreds of people to this family tree, from distant ancestors in 17th German principalities to distant cousins in 21st century America.

When we envision this kind of family tree, it’s literally is in the shape of a tree, with the youngest generation – the children – at the trunk. Above them are their parents, then their grandparents, and onward and upward from there, branching off in multiples of two toward the heavens. If we’re lucky enough to be part of a family with a well-recorded ancestry, the leaves and branches are numerous and well-defined.

This kind of tree works well as a visual metaphor – it’s literally the shape of an ancestry chart – but it’s actually got things upside down. If children really are the base of the tree, stretching their growing arms toward the sky, then we – their parents, and then their grandparents, their great-grandparents, and so forth – are the roots of the tree. While the largest and most prominent roots may be visible at the base of the tree, those below the ground are invisible. Our heritage – genetic, cultural, linguistic, religious, and so forth – is often unseen but critically important.

Without all those who came before us – our roots – we would be in danger of toppling in the slightest breeze. And so many of us do suffer because of the circumstances or experiences of those who came before us. How often do the negative experiences of today draw from the pains of yesterday? From an outsider’s perspective, these factors are hidden beneath the surface, but they inevitably cause aches today. “Generational trauma” and “adverse childhood experiences” are more than social scientific concepts for many people.

In a forest, trees – like people, families, or communities – may compete with each other. But they also have an ability to communicate and cooperate – underground. Scientists are discovering that through a vast underground web of roots and fungal networks, trees can actually share nutrients with each other.

Of course, others of us are fortunate enough to have sprouted from strong roots – ancestors and experiences that positively nourished us, that help us remain stable in the strongest of winds. As parents, grandparents, or older relatives to young people, we should always try to offer a strong and firm, yet flexible, foundation for those who are beginning to grow. Provide no nourishment, and the tree will wither. Provide no structure, and it will tumble.

I realize that this metaphor may apply for those of us lucky enough to have the time, resources, and energy to provide a good upbringing to our children. We are the privileged. But what about those who don’t share our material wealth or our familial stability, those who grow up in poverty, or who experience abuse, abandonment, and the uncertainty that come with them?

Fortunately, the answer again lies with the trees. In a forest, trees – like people, families, or communities – may compete with each other. But they also have an ability to communicate and cooperate – underground. Scientists are discovering that through a vast underground web of roots and fungal networks, trees can actually share nutrients with each other. Sometimes this is between a “mother” tree and related seedlings, but at times other trees – even trees of different species – can help each other out.

In a similar way, those of us with deep roots can share their strength with others, even those who don’t sprout from them. If trees can do it, so can we, by supporting the children around us as well as the institutions that provide them hope and stability. When the storms of life come, we all need roots, especially the smallest and most vulnerable among us.

Tom Giffey, of Eau Claire, is a father of two, a husband, and one of the editors of Chippewa Valley Family.